Becomes only mobile-first ad platform to reach this milestone 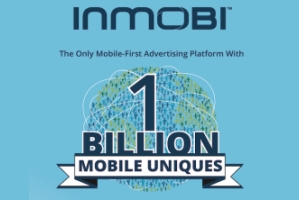 Reaching over a billion mobile devices significantly impacts the scale InMobi is able to provide to advertisers, brands and app developers. App developers in need of users in their preferred markets can now choose from one billion mobile devices to install campaigns. Brands looking to access broader mobile audiences can tap into InMobi’s highly engaged, global network.

43% of unique mobile devices on InMobi’s network come from advanced mobile markets in North America and Western Europe. Asia Pacific, which accounts for 38% of InMobi’s audience, is the second largest contributor, while Latin America makes up a further 10%.

Machine Zone, the developer of Game of War - Fire Age, a top-ranking game on the App Store with nearly 19,000 new users every day, has endorsed the global scale and reach that InMobi provides its advertisers.  “Working with InMobi team has been an absolute pleasure. InMobi has helped us acquire quality users at scale for Game of War - Fire Age, in all our key markets," said Deepak Gupta, Chief Revenue Officer, Machine Zone.

InMobi supports Machine Zone in its User Acquisition efforts across 26 countries including US, UK, Russia, Japan and Korea.

“Our commitment to creating a rich and unique mobile ecosystem is what sets us apart and has helped us reach this milestone,” said Naveen Tewari, Founder and CEO, InMobi. “We are reimagining advertising at its core, and now, with over one billion devices on our network, we are well-positioned to deliver on that promise.”