M&M's Gets Spirited Away for New Halloween Spot 'Ghosted' 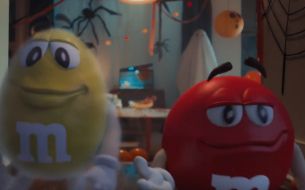 This Halloween, fans of the M&M'S brand have a special treat to look forward to – a new M&M'S commercial. It's been 11 years since the brand has released a new Halloween commercial and this year, Red and Yellow are back for a hauntingly good time.

The :15 second spot, "Ghosted," was produced by BBDO New York and takes a humorous look at "surviving" the scariest night of the year—which, it turns out, is even scarier when you're a M&M'S character. The commercial opens on Red and Yellow leaving the aftermath of a Halloween party, seemingly unscathed, as Red remarks how glad he is that they made it through another Halloween without being eaten. Yellow agrees with his friend, but is looking a little more ghostly than Red. It's not until the end, when Yellow floats away with a bite taken out of his back that the audience realises he didn't survive after all.

The commercial takes a Halloween-themed look at the brand's longstanding irresistibility storyline to show what life (or death) is like when you're a delicious piece of chocolate.

Along with the full-length spot, a :06 second version, "Eaten," will also run online.

Additionally, both "Ghosted" and "Eaten" were also developed in Spanish for Hispanic-focused audiences.

"M&M'S are synonymous with Halloween and for years we've heard from our fans how much they enjoy our Halloween commercials. This year, we wanted to create a new spot to continue that excitement around the holiday and surprise our fans in a colourful new way that brings humour to one of the scariest nights of the year by sharing a comedic, M&M'S take on the classic ghost story," said Allison Miazga-Bedrick, Senior Brand Director, M&M'S Brand. "We hope our fans enjoy this new commercial as much as they enjoy M&M'S on Halloween."

Along with the new commercial, the brand also created new Halloween-themed print ads. Previous Halloween commercials from the brand include "Headless Horseman," which was released in 2007 and "Ding Dong," from 2000. Both spots have run intermittently over the past few years. These new spots and print ads will continue to run on TV, online and in print throughout this Halloween season.