Created by TBWA Sydney and Eleven 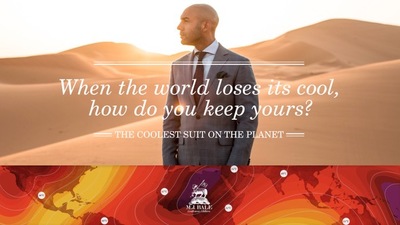 Another year, another set of global record temperatures smashed. There's simply no denying it, the world is getting hotter - and Australia is right on the front line. That's why M.J. Bale has designed its new range of Cool Wool suits to be the most breathable yet.

To put this claim to the test, M.J. Bale has partnered with TBWA Sydney and Eleven to give this very special suit to a man who is in no way designed to handle high temperatures, UK weatherman Alex Beresford.

Armed with his forecasting equipment, an M.J. Bale suit and a skeleton crew, Beresford set out on a heat-seeking mission from the set of Good Morning Britain to chase the sun around the globe and put the Cool Wool through its paces.

Every day he forecasted where tomorrow's hottest temperature was going to land on the globe, then raced to make it there for another live weather forecast. Back home, the results of these broadcasts were fed into a custom-built M.J. Bale change room designed to change

people's opinion of wool as a summer fabric, allowing the public to experience the effects of M.J. Bale's Cool Wool suits in the exact same conditions as Beresford encountered.

Each forecast was delivered through Facebook Live, allowing the public to interact with Beresford in real time. Unfortunately for him this meant that he spent 11 days being tormented by his audience, from the blistering sands of Dubai to the salt flats outside Jodhpur all the

way to the middle of the Sahara Desert. It was only when he finally arrived in the record-temperature-holding Death Valley that his audience finally relented and rewarded him with an icy cold drink instead of the molten-hot vindaloos and arduous camel rides he'd had to endure.

Despite phones melting, numerous vehicles breaking down and tempers flaring hotter than the sun he was chasing, the suit held its own in the hellish conditions.

TBWA Sydney (and member of the skeleton crew): "When we were coming up with the idea I assumed that I wouldn't actually be heading out on the shoot so we really pushed the torture elements to the limit. Big mistake, because I then had to experience it all for myself. Luckily the suit and Alex held up to everything we threw at them so it was worth it, even though it shaved five years off my life".

Says Andy DiLallo, chief creative officer, TBWA Sydney: "It's not often you get the opportunity to make a great campaign that

tortures an Englishman and your deputy ECD at the same time, so for me it was a no-brainer."

Says Matt Jensen, founder and CEO of M.J. Bale: "Looking good is a struggle when you live in one of the hottest countries in the world, with many men sacrificing style to stay comfortable. With this campaign, we wanted to show gents no matter how hot the forecast, they can still stay looking smart and feeling cool, so we invited them to feel the difference for themselves in-store. The coolest suit in the hottest change room, it was a perfect fit". 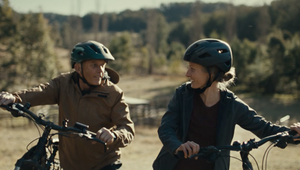