Mitsubishi Motors To Sponsor Documentaries On 4 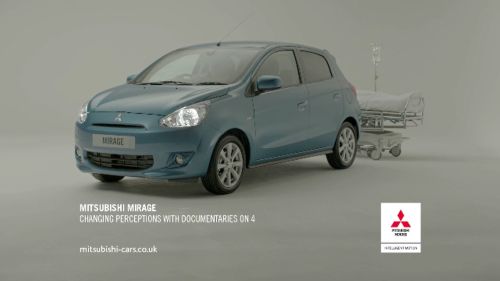 The multi-million pound partnership for 2014 launches on Tuesday 29th April at 9pm with Mitsubishi’s sponsorship idents visible around the launch episode of brand new series Mr Drew’s School For Boys.

Golley Slater is responsible for the creative which comprises of multiple idents showcasing vehicles across the Mitsubishi range including the Mirage, ASX, Outlander diesel, Outlander PHEV (Plug-in Hybrid Electric Vehicle) and the Shogun. All idents feature the voice over “Mitsubishi - changing perceptions with Documentaries on 4.”

This deal marks the first time Mitsubishi Motors in the UK has engaged in TV sponsorship since 2011 and follows a year which saw the brand become the fastest growing mainstream car manufacturer in the UK.

Rupinder Downie, Partnership Controller, Sponsorship, Channel 4 said: “Channel 4 has an enviable strength in broadcasting award winning, ground-breaking and educational documentaries that continue to inspire and provoke debate.  We are proud to announce Mitsubishi Motors in the UK as the sponsor of our acclaimed Documentaries on 4 strand.”

Steven Bedwell, Client Account Manager at Manning Gottlieb OMD said: “Broadcast Sponsorship and the value generated from such a long term investment, was something we earmarked as a key element to our FY2014 Communications strategy. To grow the Mitsubishi brand in partnership with Documentaries on 4, a brand and strand with the shared aim of changing perceptions, is something we’re all really excited about.”

Mike Leeson, Managing Director at Golley Slater in Cardiff added: “Our team have developed some fantastic work that will mark a milestone in beginning the process of changing perceptions towards the Mitsubishi Motors brand and its product range. It has been an amazing effort between Mitsubishi Motors in the UK, Golley Slater, Manning Gottlieb OMD and C4.”

2014 sees the first ever digital rig documentary Freshers launch on Channel 4 as well as the return of Turner Prize-winning artist and BAFTA Award-winning presenter Grayson Perry and internationally renowned classical pianist James Rhodes who will launch this country’s biggest ever Instrument Amnesty.

In the year ahead Channel 4 will be focusing a lens on the world of police detention in 24 Hours in Custody and the UK’s elite fighting force in Marines. And, following the 2013 hit Educating Yorkshire, Channel 4 will shine a light on the work of teachers and pupils, in Walthamstow in Educating East London.