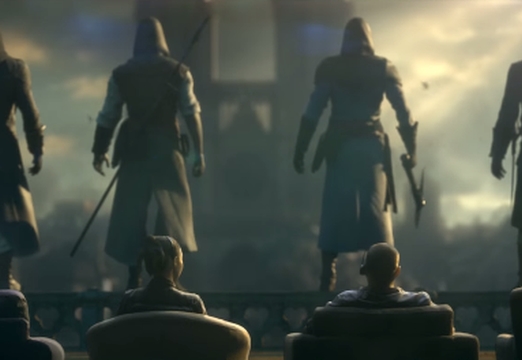 Available November 11 for next-gen consoles and Windows PC, Assassin’s Creed Unity for the first time introduces a cooperative multiplayer, enabling up to four gamers to play the historical action-adventure video game together.

“Once again, it was a pleasure to collaborate with Ubisoft on Assassin’s Creed,” said Scott Harris, Partner/Creative Director, Mistress. “We worked together to create a cinematic and rich teaser for Unity that maintains the historical context of Paris at the time of the French Revolution. ‘Make History’ also introduces another layer of intrigue with an intense in-game story around four players who come together using Unity’s new cooperative multiplayer feature.”

The trailer’s culminating fight scene depicts Arno, his Brotherhood of the Assassin’s brethren and four gamers descending upon Robespierre as executioner on a life-size guillotine built by Digital Domain. A Mistress sketch was the template for the scene.  Rembrandt-like lighting of the cityscape was created based on Croshaw’s own HDR reference photos of Notre Dame and Emery’s lighting on green screen. And Huxley created the realistic movement of the gamers in their chairs by shooting plates against green screen of the chairs at right angles, and deploying stunt men in green suits—“green ninjas”—who lifted the actors in the chairs and moved them realistically.

“We loved working with Mistress because they had a distinct vision of what the spot should be, they stuck to it and Ubisoft trusted that instinct,” Huxley said. “Using everything from the performances of the gamers which were edgy and fun to every weapon at our disposal from our VFX pipeline, helped us arrive at a very stylized cinematic spot we’re all very proud of.”