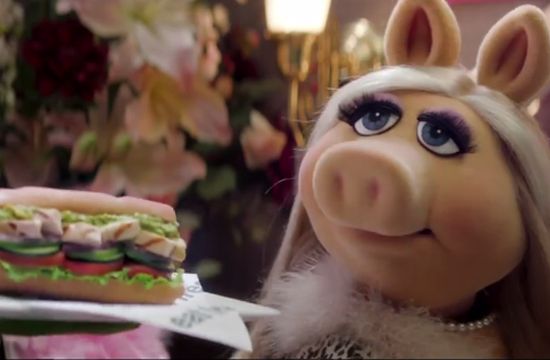 To celebrate the launch of the first film integration between the SUBWAY® brand and Disney, SUBWAY® has released an exclusive ‘bloopers’ film as part of a new multi-channel marketing campaign promoting the launch of avocado available in SUBWAY® stores for a limited time. The campaign is a tie-in with Disney’s latest Muppets film ‘Muppets Most Wanted’ which will be released at cinemas across the UK and Ireland from 28th March, 2014 and features a SUBWAY® Sub with avocado in the film.

The new film and SUBWAY® campaign features many of the Muppets well-known and much-loved characters including Miss Piggy and Kermit the Frog.  It also introduces Constantine, the world’s “Number One” criminal and doppelganger of Kermit the Frog.  The exclusive bloopers film contains behind the scenes footage of the Muppets filming the new SUBWAY® ad, and will be available to view on the SUBWAY® UK and Ireland YouTube channel this week. It shows the Muppets as they haven’t been seen before: Kermit the Frog and Miss Piggy discuss what it was like filming the ad and talk about their love of Europe and fans from the UK. Miss Piggy also reveals that there’s only one thing she loves more than Europe, and that is shooting a SUBWAY® commercial because of the edible props, the Chicken Avocado Sub to be precise.

The ad, which launched last week, shows Miss Piggy backstage in her dressing room getting ready for her star appearance.  Hungry, she demands food before she goes on stage.  Constantine, pretending to be Kermit the Frog, brings her the wrong SUBWAY® Sub not made her way.  She claims “no one can fool her” because “she knows her Subs as well as she knows her Kermie.”  As Constantine leaves, the real Kermit the Frog arrives with her Chicken Avocado Sub, made her way.  Miss Piggy, now having enjoyed her Sub takes to the stage and sings about her love of greens.  Sadly for Kermit the Frog, it’s not him but the avocado.

The £2.3 million campaign includes 8 weeks of national TV, cinema and outdoor advertising campaign, and will also be supported with digital activity, SUBCARD® communications and a consumer PR campaign. Exclusive content can also be found on the SUBWAY® UK and Ireland YouTube channel from 10th March, with exclusive ‘behind the scenes’ footage.

Commenting on the campaign Manaaz Akhtar, Regional Marketing Director, Europe, for the SUBWAY® brand said: “We’re thrilled to be working with Disneymedia+ again on the launch of Muppets Most Wanted. Our new range of Kids’ Paks are a great, collectable item that kids will be excited about long after they’ve finished their meal, and the introduction of avocado means there’s a new reason for parents to be excited about visiting SUBWAY® stores too. We’ve seen a substantial increase in the number of families heading to our stores, and we’re excited to be able to offer these families exclusive Muppets experiences both in-store and online.”

Rob Doubal, Co-President and Chief Creative Officer, McCann London commented: “Working with avocado is always fun.  And when you throw in Disney, Manaaz and all the muppets (me included) involved in the project, it’s not surprising we’ve got some really nice results.  Exciting times for Subway.”