Miojo Set for Lift Off with Intergalactic Noodle Experiment 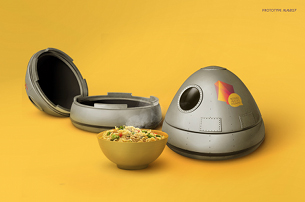 For the first time in history, food will be cooked by reentering the atmosphere. The undertaking starts today, Miojo Instant Noodles Day (anniversary of its creation), with the announcement of the names of the partners in the project.

The Mission will be supported by Interorbital, the North American rocket, satellite, and spacecraft manufacturing company that will be responsible for conducting research on the ground and tests in the air. The other partner in the project will be Emmanuel Bassoleil, a French chef currently living in Brazil, who will add a bit of science to his cooking skills to make his exclusive recipe delicious and scientifically compatible with the space mission.

In practice, an unmanned rocket will take a capsule that was built with the purpose of carrying the ingredients for the recipe created by Bassoleil to an altitude of more than 100 km and then eject it into space. The idea for the meal is to achieve the boiling point when the capsule crosses the mesosphere on its way back home. The mesosphere is the layer of Earth's atmosphere that is responsible for, among other things, burning up meteors and now also for preparing space noodles. The development of the capsule will be finalized and the tests on the rocket will be conducted in the coming months. The rocket will be launched in January 2015, kicking off the celebration for the 50th anniversary of Nissin Miojo Lámen in Brazil.

The entire mission, tests, research, and recipes will be documented and published by the project’s sponsor, Nissin-Ajinomoto. Anyone wishing to follow the mission of the most democratic and probably most intergalactic noodle in the world should visit www.nissin.com.br/missaomiojo.

The Miojo Mission is a project created for Miojo Instant Noodles Day by F/Nazca Saatchi & Saatchi, which is responsible for featuring the dish on the menu of well-known restaurants (2011), for publishing the book Meu Miojo – Receitas e Histórias (2012) (in loose translation: My Miojo - Recipes and Stories), and for training Miojo chefs in three minutes in the Fastest Culinary School in the Word (2013).