Minus18 & GPY&R Melbourne Help the LGBTI Community Come Out 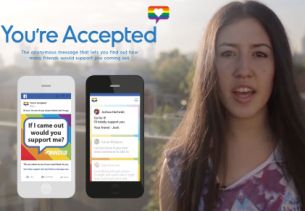 ‘You’re Accepted’ is the first Facebook message that gives LGBTI youth the chance to anonymously find out how many of their friends would support them coming out.

The platform allows users to garner support from the people they’re closest to and helps them gauge how their friends will react while remaining completely anonymous.

A person begins by anonymously asking their Facebook friends if they would support them coming out. Friends can reply directly back with positive messages of support. GPY&R Melbourne developed the ‘You’re Accepted’ concept and both built and designed the microsite on behalf of Minus18.

Micah Scott, CEO of Minus18 added, “You're Accepted is here to tackle hateful online discrimination against LGBTI youth by showing people there’s a lot more support out there than they might think. Through positive social support, provided by friends and family, we can do this together. After all, no one should live in fear of simply being who they are - everyone should be accepted.”