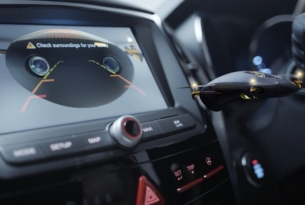 Mill+ created a swarm of CG drones to launch the new Ssangyong Tivoli. The spot, directed by Mill+ director Aidan Gibbons, features a host of sleek, micro-sized, surveillance drones, which are irresistibly drawn to the car. They proceed to glide around the bodywork before swooping in through the side-windows to take a close look inside. Once inside, their scrutiny of the surprisingly luxurious interior changes their mood. Their stealthy movements become more playful as they clearly enjoy the experience.

Each drone was designed by the Mill+ team from concept to 3D build with meticulous attention to detail, ensuring the designs were both modern and believable as well as personable and filled with character.

Once designed, the drones were then animated by The Mill’s award winning 3D team, led by Mike Chapman. The inquisitive robotic creatures were modeled, rigged, and animated with Maya and rendered in Arnold, with the compositing was handled through Nuke.

Mike comments, “Using our Mill+ team to complete this project really helped us to achieve the visuals within the challenging time frame. Having direction, editorial and post production all under one roof allowed us to develop the project quickly and organically, with all areas understanding our processes and how best to work within them.”