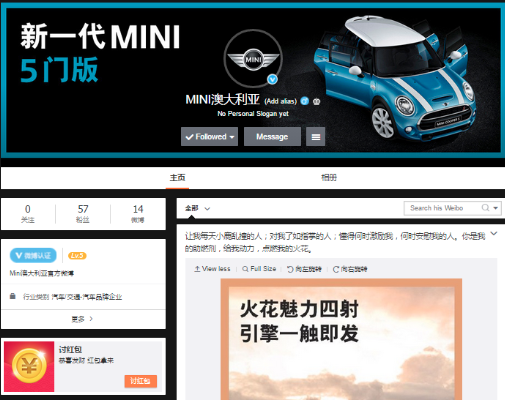 Launched to coincide with Lunar New Year, it is the first time an Australian automotive brand has utilised China’s social media giant Weibo, which has half a billion users across the globe.

The MINI Weibo presence will aim to engage MINI buyers within the Chinese community in Australia, and retain attention via regular posts and other community management, all handled by Etcom (part of Ogilvy Australia and STW).

“MINI is a brand for leaders, not followers. So it’s natural for us to be the first on Weibo, the most influential Chinese social media for the local community” says Alex McLean, CRM & digital manager of MINI.

“We see Weibo as a great channel to build a relationship with this community, in an exciting environment that other car brands have not ventured into as yet,” he said.

“Print advertising is traditionally the first channel that comes to mind by many brands in Australia to reach different multicultural groups,” explained Etcom’s general manager Thang Ngo. “However, MINI Australia wanted to pioneer a different channel.”

Ngo says because Twitter and Facebook are banned in China, new migrants to Australia are likely to maintain Weibo to keep in touch with family and friends. He said there were currently more than 1million Weibo accounts held in Australia and New Zealand.

“This kind of social environment is the perfect platform for MINI, which is a young, edgy, visual and  emotive brand. It also allows MINI to establish an ongoing dialog with potential customers within the Chinese Australian community. We feel confident that this new and bold move will engage an entirely new market for MINI – all in time for Lunar New Year.”