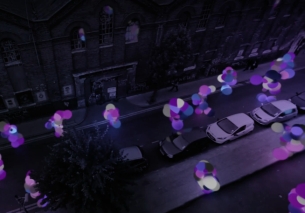 Mill+ Directors Bif designed and directed a fittingly striking Opening Title Sequence for this year’s OFFF Porto, a festival of Post-Digital Creation Culture, which describes itself as “an open community to all those who seek inspiration, creation and innovation.”

For the film Bif created otherworldly CG bubble creatures, which although entirely animated nevertheless have a distinctly human quality. They navigate their gritty urban environment, filmed with live action clips shot in London, and go about daily tasks such as going to shops and taking public transport, but as night falls they multiply and begin to dance in the streets. Their luminosity in the nocturnal scenes has an utterly enchanting effect.

In approaching the project, Bif wanted to, “Create an original opening title, more like a music video than a classic motion graphic piece. We created a journey through the city following some colourful and quirky CG characters whose playful nature contrasts with the dark urban atmosphere, shot in black and white 5D.”

Bif describe the process of creating the sequence, “We used motion capture and fun CG bubble men who were 3D tracked into live action sequences, giving a real sense of realism and humanity to the quirky characters. Echolab came up with a bespoke and lovingly crafted soundtrack for the film, which incorporated street sound-design with a dreamy electronic track. It was important to us to bring the audience on a surreal, trippy dream.”

Executive Director at Mill+, Stephen Venning comments, “In truth as Mill+ we’re always looking to invest in the right project, but we’re also reliant on our talent really seizing the opportunity. And in creating the titles for OFFF Porto our Bif team have absolutely nailed it. The playful nature of the animation makes it so compelling and charming to watch, not to mention the perfectly matched sound design from Echolab and the composer. It’s one of my favourite things of the year. I’m very proud of what the guys have achieved in 2015. Their ‘Green’ promo and now this, amazing.”