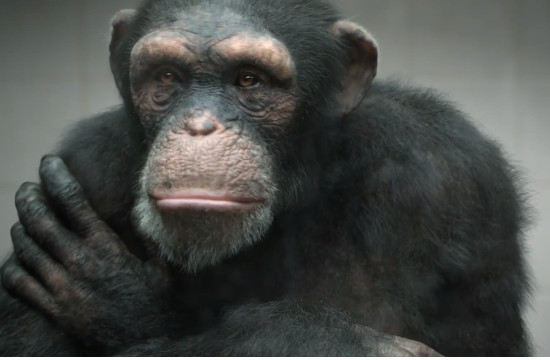 Mill+ NY has partnered with BBDO NY and PETA to create a ground-breaking new public service announcement, ‘98% Human’.  The PSA represents the latest in PETA’s on-going efforts to educate the entertainment industries about the abuses great primates suffer when “trained” to appear live in commercials, programs or films.  Last year, BBDO and PETA partnered to create the Great Ape Pledge microsite.  This year, thanks to the efforts of Mill+ NY, the project has been taken to an entirely new level:  the creation of a photo-real and lifelike chimpanzee.

The spot tells the dramatic story of what can happen when a primate is used in a commercial production.  Our character is a great ape, who was taken from his mother when only weeks old to act in front of the camera. Like most ape ‘actors’, during training the ape will be kicked, punched and beaten to perform.  It asks “could you live this life?”  The PSA then asks people to take the Great Ape Pledge and to vow to stop the use of primates as actors.  To underscore its message, the PSA features the voice over of the American actor Adrien Brody, who donated his services in recognition of the importance of the issue.

The Mill+ team was led by director Angus Kneale, who explains some of the complexities and new techniques Mill+ created to bring the photo-real chimpanzee to life.

“This was one of the most exciting and challenging projects I’ve ever worked on.  Crafting PETA “98% Human” was more than about creating a totally believable, photo-real CG Chimp. It was about establishing an emotional connection and empathy with the audience. In the past we would have used motion capture and mapped a human actor’s performance directly onto the CG character, but we wanted to approach this project in a different way, so we decided to rely on the skill of our animators for the final chimp performances, only using an actor for previs,” he explains.

“We pushed computer graphics imagery to a new level creating bespoke technology in muscle and skin simulation, higher than any other project or film to date.  We achieved this by developing new techniques from simulated bloodstreams, skin tension and even individual pores at the base of every hair on the chimpanzee, all with the aim to create a creature that is practically indistinguishable from his flesh and blood counterpart”.

Toygar Bazarkaya, executive creative director at BBDO New York believes, it was crucial that the spot had an authentic feel. “Our goal was not just to raise awareness of the problem, but also to introduce a solution.  Thanks to the revolutionary new CGI developed by The Mill, the great ape not only looks real, it actually feels real.  It captures not only the motion, but the emotion of the animal and proves that it’s no longer necessary to use real great apes,” he says.

Julia Gallucci, a Primatologist from PETA, adds, “We are incredibly appreciative of the time and effort that BBDO and The Mill have donated to this cause.  These organizations have always been leaders in their respective industries.  Now we know why.”

‘98% Human’ is a collaboration between BBDO NY and the Mill+.  It demonstrates the partnership between creativity and technology by delivering on PETA's powerful message that you do not need to use live primates as actors, now that we can create a fully life-life, photo-real primate.