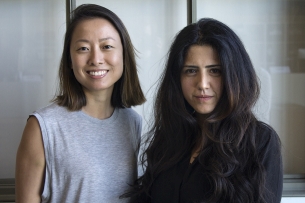 Mill+ is pleased to announce the promotion of Clarice Chin and Manija Emran to Creative Director in the Los Angeles studio.

Chin, a graduate of Carnegie Mellon University, has a decade of experience in commercials, film, print and broadcast with a creative vision inspired by contemporary art, fashion and graphic design. Her widely celebrated work includes multiple Google Play campaigns, the AICP 2014 Opening and Category Titles and the interactive 'Exhibit: Growth' for Umpqua Bank, and has been recognized by D&AD, AICE and The One Show.

Emran, with a meticulous eye for detail, is universally recognized for her award-winning hand-produced title sequences for 'We Are The Giant', 'Manhunt' and 'Snow White And The Huntsman' alongside the acclaimed 2013 and 2014 Show Packages for The Academy Awards. With a portfolio that covers all facets of design, Manija has been honored by Art Director’s Club, One Show, D&AD and named amongst Art of the Title’s Top 10 Women of Title Design.

Stephen Venning, Executive Director of Mill+, comments: "It’s fantastic to see Clarice and Manija, who both joined as Art Director, rise to the role of Creative Director. Through their outstanding award-winning work and leadership they’ve been integral in building the excellent reputation of the Mill+ team in Los Angeles.”

“I’m so happy to see Clarice and Manija step into this role. They’re exceptionally talented and I’m excited to see what they achieve next."