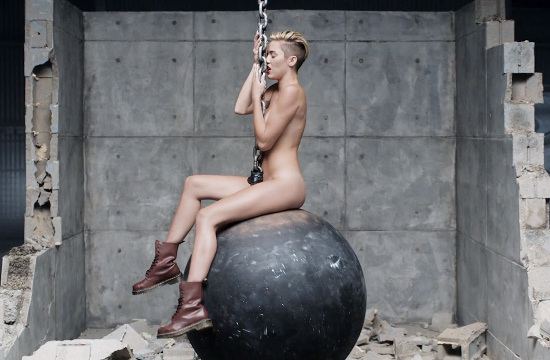 Miley Cyrus pours gasoline on the media brouhaha ignited by her “We Can’t Stop” video and twerk-heavy VMA performance with the latest video directed by fellow provocateur Terry Richardson. The celebrity photographer brings his shock-heavy reputation to moving images with the Black Dog-produced clip for Miley’s second single “Wrecking Ball".

The video opens with an intimate close-up of a tearful Miley delivering the breakup ballad’s lyrics, before we see her wielding a sledgehammer in only a cropped white wife beater, matching panties, and Doc Martens.  Visions of her suggestively licking the tool and writhing among the rubble lead to the video’s most shocking image: the former Disney darling straddling a swinging wrecking ball completely naked.

For all its salacious imagery, the video gives its agape audience a refreshing glimpse at Miley’s more vulnerable side as she belts about a destructive relationship.  With the 20-year old literally baring everything atop the song’s namesake, Miley gives a perfectly apt metaphor for the boom her zero-to-grown-up metamorphosis has had on pop culture.