Miles Kempton: A Look Back at Grand Central Recording Studios

From decibels to dumbells, Miles takes us through some of the formative years of his life at GCRS 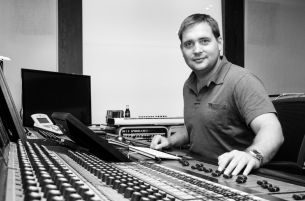 In June 2004 I started my career at Grand Central Recording Studios as a runner, having just finished a nine month course in Audio Engineering at Alchemea. I was very excited about this new career path after making the switch from banking into sound, and had heard that Grand Central was one of the top studios around.

My first memory of GC was turning up for my interview, at the old studios in Marshall Street, and getting bollocked by Carole [Humphrey, founder of GCRS] in reception because I hadn’t brought a copy of my CV with me.

I realised very quickly that Grand Central had an infallible ambition for quality and high standards, and that these traits were honed and instilled from day one in the kitchen. This ethos of work hard, was complemented by the notion play hard, which created a real band of brothers mentality within the company. This is what I love about GC, and the reason why the majority of staff stay!

The play hard aspect of GC saw us, en masse, frequenting the likes of O’Neils or the Star & Garter most nights. Whether management cottoned on or not, they certainly knew how to blow the cobwebs away the next day, as Carole would time us with a stop watch to run errands between the two studios at Marshall Street and Marlborough Street. With results being noted down and orders to beat your last time, Carole was probably running Soho’s first HIIT boot camp.

I have loads of fond memories running at GC, but it was hard work and runners could drop like flies, either not being able to roll with the punches, or not being prepared to do the hard graft. Their loss was our gain.

One thing that has always stayed with me was the effort all the engineers put in to help and teach the runners after hours. Many a night I would ask an engineer to show me something on the desk or have a look at a project I was doing; they would always stay behind, no questions asked. There has always been a real family atmosphere and environment at GC.

After running for 18 months my time in the kitchen was done, leading to a stint in bookings for six months before I moved into transfer. However, before I left the kitchen, I opened my first tab with Carole, after getting pissed in O’Neils then leaving my rucksack containing my new contract and all my keys for both home and GC on the bus. After replacing all the locks in the office and getting 30 or so keys cut for everyone, I was looking at a lot of overtime to settle this tab!

I really enjoyed my stint in bookings, as it allowed me interact with clients on a more personal level. It also gave me the opportunity to go to Cannes Lions for the first time, and also out to client lunches. I’ll never forget my first client lunch, and neither will management at GC! It was with Sam Myers, Paula Haughey and myself. Carole and Ivor warned me before I left that the idea of client lunches was not to get drunk, and I should act responsibly in my new role, I assured them both and then completely ignored them and got wasted at lunch anyway. Afterwards, it was on to the pub … anyway, to cut a long story short, the next thing I remember is at 2.31am seeing Carole’s Mazda speeding up Great Marlborough Street, like the Batmobile, while Logica’s security guard had me detained in reception. The intercom system outside GC was on its side and six of the marble steps were broken.

After spending the night on Carole’s couch, I was driven into GC on the Saturday and set to work with a pick axe digging out the soon-to-be VO booth in Studio Nine. Meanwhile, my ever inflating GC tab was starting to look like the asking price for a flat in London, and Carole banned me from drinking in Soho for six months. I was devastated.

Next up was a four-year stint in transfer, where you go from novice apprentice to managing the bay. It is the technical hub of the company and where I really started learning the practical ins and outs of the studios. Here, the GC take on attention to detail acquired in the kitchen paid off. It was the days when clients watched the final laybacks behind you in the bay, while you were transferring to VHS, DAT and Digi Beta’s all at once; one slip of the finger could mean overwriting the master picture. The steel nerve, ability to work under pressure, and cool temperament that was needed, were attributes you learned being a GC runner. Transfer was great, but hard work; late nights were every night, but the team comradery got you through.

After transfer, it was on to engineering, which was an absolute pleasure to work in at GC. The sheer quality of all the modern kit and equipment, and the continuous drive to be leaders in the audio field is what Grand Central is renowned for. Working in this environment was really inspiring and a great experience.

Unfortunately, it was the industry itself and – to be specific – the lack of creative work and general feel of quantity over quality that spurned another sideways career step for me, into the realm of coaching. After 12 brilliant years, I’m making a change to work in personal training, specifically strength and conditioning within rugby and boxing, with a five-year academy in corrective exercise and rehab on the horizon.

However, I won’t be completely deserting the field of sound design. One of things that has stayed with me since I was a runner, and the one thing I am very passionate about continuing and developing, is sharing skills and knowledge with the juniors and runners who all have an aching desire to get into the studios and learn as much as they can when they start at GC. Traditionally, your technical apprenticeship starts only when you move into transfer; anything outside of that is done behind the scenes in your free time. So, I’ll be supporting the next generation and running a training scheme at GC on a freelance basis alongside my new venture. My love of GC, everyone there, and its philosophy, that has looked after me and taught me everything for the past 12 years is the reason that I still want to be a part of it – plus I still need to pay off a tab or two.