Trends and Insight 365 1 Add to collection 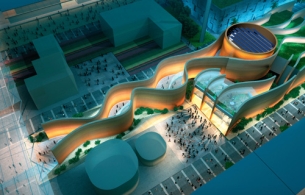 Here at GOLDSTEIN we're getting ready for this year's International Expo, the theme of which is 'Feeding the Planet, Energy for Life'. We are thrilled to be providing musical goodness to the United Arab Emirates Pavilion designed by London's wonderful Foster + Partners.

The concept for the Pavilion is to highlight the challenges that arise in feeding the planet, and to demonstrate and explore the innovative solutions that the UAE are developing to combat such issues. It is their belief that through 'sharing knowledge and resources', they are 'truly helping to shape the future.' The striking design of the building itself is created by a series of tall 'rippled' walls that are directly influenced by the form of the UAE's natural beauty, due to the 3D scanning technique of the sand dunes' surface that dictates the structure's pattern. The design also evokes the 'narrow self-shaded streets of the UAE’s historic settlements', and encourages visitors to experience the Pavilion in a way that is equally enjoyable and informative.

We asked Jonathan Goldstein to talk us through the creative process behind composing music for the United Arab Emirates Pavilion and how it differs from compositions for film and TV.

"The creative process is much like scoring for a movie: watching early edits of each film with the director and ‘spotting’ where the music should go and what role it should play. The task then, is to combine traditional and modern sounds to create a hybrid score of Western and Middle Eastern influences that works on a grand, cinematic scale.

For the last Expo, in Shanghai 2010, I was lucky enough to be sent to the UAE to do some research on the music of the region. I met some fascinating performers there, including a choir in Ras al Khaima of the UAE’s original surviving pearl fishermen. Their chants constitute a big part of the UAE’s musical heritage and this provided me with some wonderful material on which to base some of the musical themes. I also watched some folk music groups and learned more about the different traditional instruments and how they’re played."

"No research trip for this year’s Expo, sadly, but I have been able to draw on past experiences once again and collaborate with composer, Marios Takoushis, with whom I’ve worked on a number of important projects, to create a striking and original fusion of Middle Eastern and Western styles. As an added bonus, the director of one of the films in the pavilion, Nujoom Alghanem, kindly provided us with some fascinating and beautiful traditional material from her large collection of recordings, including a song written by Sheik Zayed himself, the founder of the UAE.

The biggest difference between composing music for events and installations as opposed to film and TV, is that live events take place within a large physical space – sometimes on enormous IMAX-style screens – and so it’s important to use broad brush strokes and as much colour and dynamic range as possible to make sure the music makes a big impact. The use of spatial sound is an important element too, using a highly complex surround sound system, several times larger than 5:1. The music is separated into dozens of individual stems which can be placed anywhere around the space to maximise its live effect and interact with the sound design. This means composing with constant thought as to how the score will work physically, and mixing the final version on-site which can take days to get absolutely right!"

"The brief for any large-scale presentation like this is to fill a space with a dynamic and immersive audio-visual experience that promotes the client’s vision and message. This allows for a lot of freedom creatively but the important thing always, is to achieve the right balance between the cultural identity of the subject and that of the audience. It’s a challenging process but a fascinating one. World Expos provide an extraordinary opportunity for creative and cultural fusions."