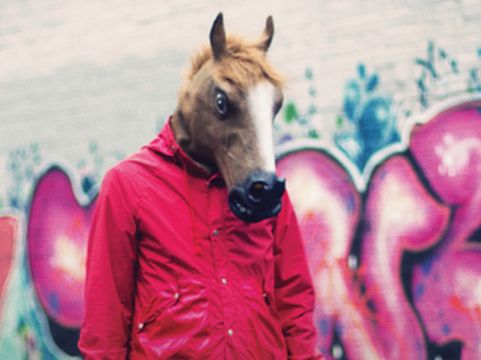 Dave Brown, one of the stars of BBC cult television show The Mighty Boosh, was enlisted by British Champions Series for its latest marketing campaign aimed at attracting students to horse racing.

Dave Brown, aka Bollo the Gorilla, is the man behind the lens of the #WhyTheLongFace campaign offering 2,000 students free tickets to the richest raceday in the calendar, QIPCO British Champions Day on Saturday 18 October at Ascot Racecourse.

The campaign has a noticeable Mighty Boosh quirkiness to it with the star of the photos being a student donning a horse head with the simple question, #WhyTheLongFace. The artwork will be used on social media and as part of a digital marketing campaign to encourage students to take advantage of the amazing free offer, as well as being displayed at university campuses across the country and in student targeted publications. 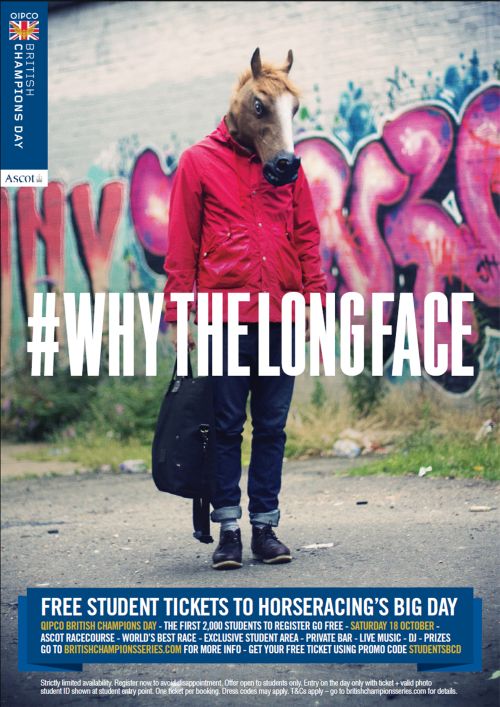 Stepping out of the ‘Zooniverse’ which he inhabited as Bollo, Dave Brown commented on the commission saying: "It was great to work with London agency BEAR on this campaign for British Champions Day. I always love to inject a bit of humour into my design & photography work and #WhyTheLongFace is a great example. Hopefully the slightly surreal images of a half horse/half human looking rather down in different situations will appeal to students, making someone smile is always a very powerful way of communicating a message, mind you, so is offering free tickets."

As well as writing, directing and performing as a comic actor and member of The Mighty Boosh, Dave Brown has over 19 years’ experience in the creative industry working with top agencies in London and Sydney before setting up his own agency in 2007.

The student initiative on QIPCO British Champions Day aims to attract students to racing, the country’s second biggest spectator sport, by allowing them to experience top class action on track as well as an exclusive student area on site all for free.

Rod Street, Chief Executive of British Champions Series said: “We’re delighted with the response we’ve had to the campaign so far and tickets are going quickly so if you’re a student and want to come for free, make sure you reserve your ticket soon. Racing’s a great day out and there’s never been a better opportunity for students to experience the best of what the sport has to offer than QIPCO British Champions Day.”

This is the first time British Champions Series has engaged with a creative agency to deliver a student campaign. The first 2000 students to register can secure their tickets by clicking here.