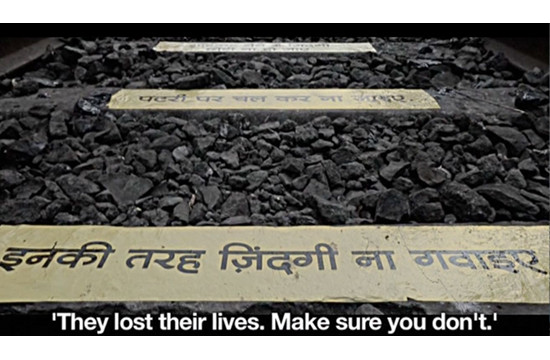 The Midas Awards® Grand Jury of 30 international client and agency leaders awarded one Grand Midas, 27 Gold Ingots, 48 Silver Ingots, and 67 Finalist Certificates. Midas Awards is the only competition that recognizes excellence in financial services communication on a global scale, and received entries from 28 countries this year.

JWT Mumbai earned the prestigious Grand Midas Award for “Death Track” for client Birla Sun Life Insurance. The Public Service campaign, a one-of-a-kind memorial site, painted the names of railway accident victims on the Sion-Motunga tracks in Mumbai. More than 2,000 people die each year crossing the tracks, the biggest cause of railway accidents in the city. The placement of the memorial and the message on the railway tracks ensured that hundreds of passengers viewed the memorials daily and stopped them in their tracks before taking that one fatal step.

“I love it when public service work earns the big prize. It’s such an inspiration. And ‘Death Track’ is a brilliant idea—so simple, and so perfect for the issue it addresses,” said Alisun Armstrong, executive director, Midas Awards. “Whenever public service campaigns win, everyone wins—the agency, the client, and the public. Kudos to JWT Mumbai for such great creative and execution, and to Birla Sun Life Insurance for supporting such an important initiative.”

JWT Mumbai also earned a Gold Ingot for “Even Gods Can Feel Insecure” for Birla Sun Life Insurance. The campaign told the bounce-back story of Yuvraj Singh, India's dashing cricketer and BSLI brand ambassador, who battled cancer and made a complete recovery eight months later. The campaign illustrated the brand’s promise “Live with confidence through the ups and downs of life.”

Like JWT Mumbai’s winners, there were many campaigns that humanized financial services in this year’s competition.  The Jupiter Drawing Room, South Africa earned a Gold Ingot for “Human Spirit” a campaign for client Absa Bank, the biggest sponsor of sports and the arts, which emphasized that they sponsor the human spirit; and M&C Saatchi Direct & Digital Communications Australia was honored with a Gold for “The New Face of Finance” for My Health, which showcased everyday Australians from all walks of life as if they were on magazine covers, debunking the theory that the world of investing belonged to the “suited and booted.”

Social media campaigns were prominent in the winner’s circle. Artplan Brazil led the pack earning 4 Gold Ingots for “The Social Home Tour 2.0” for Carvalho Hosken. The campaign created a showroom apartment that used Facebook to personalize the home buying experience. Lavender Australia received 3 Gold Ingots for “Pay Pig” for client Westpac Bank, a mobile app that teaches kids about their earning power in the home through chores. R/GA USA earned 2 Gold Ingots for “MasterCard Miyamo,” a Facebook app that lets people share, comment on, and discover new music. Prudential Advertising USA received a Gold Ingot for their campaign that marks the brand’s first presence on social media and presents the 5 challenges of saving for retirement. The Jupiter Drawing Room, South Africa was recognized with a Gold for their virtual country, “The Democratic Republic of Design,” created for client Absa and populated with posts and engagement by attendees of Design Indaba.

Collateral and Print campaigns were in the spotlight this year scoring multiple Gold Ingots. M&C Saatchi Direct & Digital Communications India earned 3, 1 for “Hastakshar Mudra” for client Aditya Birla Money and 2 for client Birla Sun Life Insurance –1 each for“Karva Chauth”, which paired a romantic traditional festival and the need for life insurance and “Laxmi Papad” a mailer aimed at conservative investors. Other collateral entries  earning a single Gold Ingot include: 34 South Africa’s entry “Direct Mail” for client Whipping the Cat–featuring a sewing kit that very literally defined a law firm’s “tailored” legal solutions; The Partners United Kingdom “Investec Investment Institute Journal” for Investec Asset, which turned words into typographical pieces; Rahofer Werbeagentur Austria “Increasing The Power Of The Brand” for client Palfinger AG that created a partially magnetic annual report illustrating the attractiveness of the brand; and antwerpes ag Germany “Genuinely Basic” for GB v0.12 designed a clever piece that goes old-school on the annual report. King James South Africa’s targeted print campaign “Day by Day Campaign” for client Santam earned the agency a Gold Ingot. The entry aimed to help South Africans “Be safe out there,” with different ads running every day of the week, each one detailing the most likely accident to happen that day.

Founded in 2001, the Midas Awards is the only competition to recognize excellence in financial advertising and marketing on a global scale, honoring the World’s Best Financial Advertising™ in banking, brokerage, insurance, mutual funds, credit cards, real estate, accounting, and consulting.