The dance and basketball-based MR immersion was commissioned to draw in more women, as well as users who may not be gaming aficionados 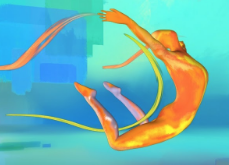 MOVE Studio boasts two modes: “Play” and “Create.” Within “Play,” everything from sound design to visual effects are transformed based on the users’ changing position. In “Create,” the user enters a full-scope creators’ sandbox for adults, where pairs of dancers or dribbling basketball players can be coloured and scaled, then dropped into environments each with their own gravitational and medium characteristics. Both modes allow the user to shape his or her environment with no restrictions, empowering them to freely explore their digital space.

According to its creator, Melissa Painter, Founder/Creative Director at MAP Design Lab, the dance and basketball-based MR immersion was commissioned to draw in a greater audience of women, as well as users who may not be gaming aficionados. Pushing forward to create a future computing space that fosters creativity for its users, rather than a purely entertainment space, the experience broadens the inherent MR audience while redefining how users think about and use computers. This new relationship urges users to literally move.

MOVE Studio launched worldwide on the Microsoft App Store, and in retail demos in stores in Microsoft and partner stores in United States, Canada, UK, Germany, France, China, Japan, Australia. The launch coincided with the Windows 10 Fall Creators Update, the first spatial operating system with a library of inspiration content to get users started in Mixed Reality.