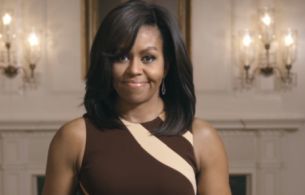 BBH Los Angeles, in support of The White House and Civic Nation, has released a star-studded campaign today to launch the first United State of Women Summit, which will address critical issues facing women in 2016 and which takes place in Washington D.C. on 14th June, 2016.

The film brings together a who’s who of the most prominent women in their fields from multi-award-winning performers Meryl Streep, Kerry Washington, Connie Britton and Laverne Cox, to entertainment power-players Shonda Rhimes and Tina Fey, comedians Jessica Williams and Aidy Bryant, trailblazing NFL coach Jen Welter, leading CEOs Indra Nooyi and Tory Burch and cultural icon Oprah Winfrey alongside activists, innovators, and political figures including the First Lady of the United States, Michelle Obama, as they invite us to take a stand together as the united #StateOfWomen.

By assembling some of the most unique, dynamic and inspiring female voices in culture today, the film lays out a manifesto for the Summit, which will address critical issues facing women in 2016 from economic empowerment and educational opportunity to innovation, health and violence, as well as issuing a rallying cry to get involved.

Pelle Sjoenell, BBH Worldwide Chief Creative Officer and Founder of BBH LA, said: “Equality is fundamental to me personally, but it's so much bigger than an agency, industry or American issue. It's about humanity. We feel incredibly fortunate and honoured to be helping The White House to make a difference on this matter."

The wider campaign encourages people to join the movement at #stateofwomen or pledge to take action by using the pledge generator on the United State of Women website.

The film was co-produced by BBH LA as a part of the Creative Alliance, in partnership with Pepsi Creators League content studio, brand strategy agency Wolf & Wilhelmine, and influencer agency RPM.