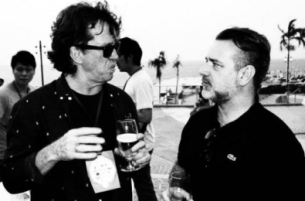 Back in October, Little Black Book and Campaign Brief announced a new partnership that would expand LBB’s footprint in Australia and New Zealand. The announcement raised a few eyebrows at the time, and invited a lot of curiosity – but five months later the relationship has turned into a real success story.

Speaking at Adfest 2016, Campaign Brief editor and publisher Michael Lynch revealed that the partnership has come at the perfect time as agencies and production companies in Australia and New Zealand are seeking more international clients and collaborators than ever.

“We’ve got a lively local trade press but what people really want is worldwide fame, and that’s what LBB can give them,” says Michael. “These companies are doing great work at home but they want to tell the world about it – because it’s a small world.

In the past five months, that fame factor has proven extremely popular, as both web traffic and memberships have grown significantly.

“Since last year, almost all of the best production companies and ad agencies have joined, including Clemenger BBDO, M&C Saatchi, Leo Burnett, DDB, McCann, Havas, Saatchi's, 303MullenLowe, Ogilvy, Y&R, VCCP and Marcel plus top indies like The Monkeys, Special Group, WiTH Collective, The Hallway, Reborn and Matterhorn,” says Michael, who says that Australian and New Zealand companies are looking for global work. “What’s more, many of the senior creative directors in the antipodean market have come home to Sydney, or Melbourne, or Auckland following long stretches in New York, London and Singapore – and they’re bringing that global mind set with them.”

For Michael – affectionately known as Lynchy among the local industry – the partnership marks a new evolution for Campaign Brief. The Australian edition was launched in 1987 and Campaign Brief Asia opened in 1997. Now, almost 30 years later, he’s helping to build a global platform. And the most connected man in Australian advertising is now helping to connect Aus and NZ with the rest of the world.