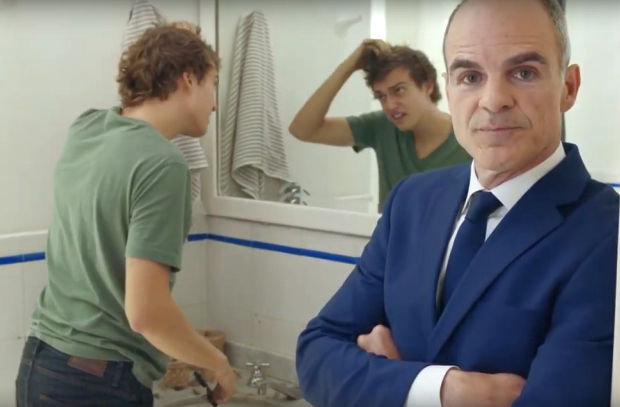 Today, hair salon franchise Supercuts has announced the launch of a new brand campaign, part of its larger shift and investment in strategic marketing. The upcoming campaign stars highly accomplished actor Michael Kelly, who reminds us all to appreciate our most undervalued asset: our hair.

The cross-channel campaign, created in partnership with TBWA\Chiat\Day Los Angeles, includes a series of films that leverage Kelly’s humor to highlight Supercuts’ own love of hair. Fueled by the insight that more men are caring more about their appearance than ever before, actor Michael Kelly humorously speaks to the importance of taking care of your hair — from the perspective of someone who no longer has it.
“Supercuts has always challenged the notion that quality haircuts have to come at a high price,” said James Townsend, CMO of Regis Corporation. “Right now, it’s as true as ever. While other brands in the category lean on gimmicks or price tactics, we’re laser focused on delivering the highest quality haircuts, from stylists who benefit from our amazing training and support ecosystem. We’re introducing an awesome new voice for the brand, and what better way to kick things off than with the unmatched talent and humor of Michael Kelly.”
The campaign is part of a larger shift by Supercuts and parent company Regis to invest in marketing, technology and merchandise that meet the needs of today’s consumer. Last year, Supercuts announced a multi-year partnership with Major League Baseball, a sport with cultural cachet and a media environment that strongly over- indexes with value-salon customers.
Regis also announced the appointment as its chief marketing officer James Townsend, formerly a global partner for creative agency 72andSunny.
These changes are part of an effort to reinvigorate the brand’s creative approach to marketing communications to resonate with consumers, and to establish the brand voice — and humor — in the value-salon category.
The new brand work will begin airing nationwide starting July 9 across TV, digital, pre-roll, social and radio. The brand’s website and other owned channels will also receive a refreshed look with new models who reflect the modern haircut trends and style of today’s consumers.
“This campaign allowed our agency to do what we love most: Identify the soul and voice of a brand that differentiates its business within its category,” said Renato Fernandez, CCO, TBWA\Chiat\Day Los Angeles. “What we found in Supercuts was a playful, fun tonality that enabled us to bring humor to the concept of not taking your hair, or the value that Supercuts offers for granted, while still having a bit of fun connecting with the next generation of men who may face this reality one day.”
view more - Creative