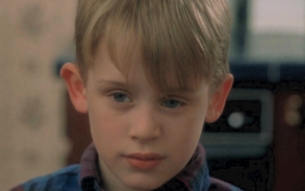 That cuddly Macaulay Culkin sure looks creepy now, thanks to Assistant Editor Michael Barker of Relish. He won First Place in the AICE Toronto Camp Kuleshov trailer competition with his horror-movie version of the 1990 holiday classic “Home Alone,” titled “We Need to Talk About Kevin.”

Barker came out on top in this year’s contest, which also saw honors presented to second and third place winners and two honorable mention entries.  Kudos were handed out at a party and awards presentation held last night at Rivoli.

The assignment for assistants this year was to cut a sixty-second movie trailer that promotes one of the source films as a non-Christmas movie of any genre.  The list of films they had to work with included “Home Alone,” “The Nightmare Before Christmas,” “National Lampoon’s Family Vacation,” “Miracle on 34th Street” (the 1994 remake, not the 1947 classic) and that evergreen, “A Christmas Story.”

Honorable Mentions were presented to Assistant Editors Steve Puhach of School and Jacqueline Pietrangelo of Married to Giants, both of which were singled out for their genre-bending takes on “Home Alone.”

Barker took home a prize of $1,000 for his First Place winner, which Gallagher winning a cash prize of $500 for Second Place.  Shiffman won $250 for his entry. Among the members of the Toronto chapter who helped organize and conduct the event were Jackie Roda and Dorota Kepka of Relish, Carolyn Atyeo of Panic & Bob, Emily Torontow of School, Yumi Suyama of Rooster and Julie Crystal of Married to Giants.