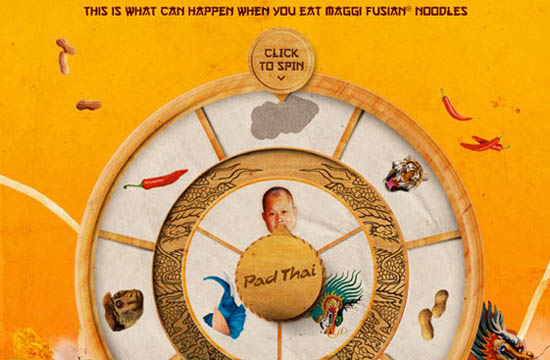 Gen Y can now enjoy mobile noodle entertainment whenever they want thanks to MercerBell and MAGGI FUSIAN’s new variant of Pad Thai noodles.

The social media campaign brings to life the Pad Thai flavour’s imaginary adventure, via the MAGGI FUSIAN Flavour Mixer, which lives on mobile and Facebook. The app, developed by Pixolüt, dishes up short stories based on combining the Pad Thai ingredients, so if the wheel lands on monkey and peanut, you’ll see a forbidden romance. If it lands on dragon and monkey, you’ll get a primate with ridiculously good hair.

“Our predominantly male, Gen Y audience has digital in their DNA, a mobile as their best friend and a very short attention span,” said David Bell, Executive Creative Director at MercerBell. “The MAGGI FUSIAN Flavour Mixer serves the stories as gifs, which visually represent the brand in seconds.”

Most of the gifs are pure entertainment, while some are tutorials about how to cook the product.
The imagery is based on the components of the original artwork for the product launch by collage artist, Laurindo Feliciano.

To extend the shareability of the campaign, popular blogging platform Tumblr will be used to feature all the mini-stories, via a tab on the Facebook page. This will have the added benefit of making the content easy to reblog and share.

MAGGI FUSIAN Noodles Pad Thai social media campaign is building on the recent launch of the new flavour variant by Publicis Mojo, and the campaign line “Caution, may cause …”
MercerBell’s social media campaign will be supported by other online activity including digital banners which have been created as animated versions of the posters. MercerBell will also be managing the online community and maintaining the campaign going forward.