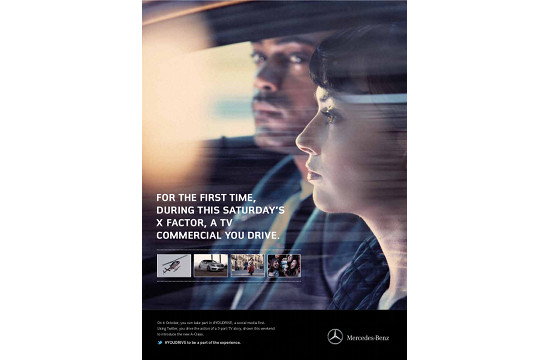 To launch the new Mercedes-Benz to a wider and younger target market, Mercedes-Benz and AMV BBDO have created #YOUDRIVE, an interactive TV campaign for the new A-Class that invites the audience to drive the story via Twitter, the first time such an event has been executed.
Beginning with this ground-breaking TV/social media event, the multi-media launch campaign for the new A-Class matches the innovative and creative benchmark set by the new Mercedes-Benz car.
The A-Class represents a new generation Mercedes-Benz – mixing efficiency with performance, rewarding dynamics, advanced connectivity, refinement and safety.
The story takes the form of an exciting cat and mouse caper, during which a music superstar (played by Top Boy actor Kane Robinson) tries, with the help of a female professional driver, to get to a secret gig.  Panicked by the hysterical fans and keen to stop the gig, the authorities try to stop them. Different scenarios shot on the streets of Portugal by director Yann Demange (‘Top Boy’), allow the viewers to steer the narrative.
View the trailer below:
Written in the knowledge that the UK has more ‘dual-screen’ viewers than any other country in Europe, the three-part story will be shown this weekend (Sat 6th/Sun 7th Oct) during the commercial breaks in the X Factor, the UK’s premier live show and one of the most followed programmes on social networks.)
A 60” TV ad appears in the first commercial break and at the end of the ad, when the driver is faced with a dilemma, the consumer is invited to 'drive' the next part of the story.  Using Twitter, viewers are able to steer the action of the commercials by tweeting the hashtag assigned to the action they prefer.  In the next break, a 40” ad will play out the option chosen by the majority of the audience. At the end of that commercial the audience are faced with another tricky predicament and asked to 'drive'.
During the Sunday results show, a 90” ad will air, recapping the first two episodes before showing the concluding chapter most popular with viewers.  (Dynamic data inputted into the ad will reveal the audience percentage of votes which the winning ad has received.)
A sneak preview of the new campaign is being launched today (Mon 1st Oct), with 10” TV teasers, press, posters and online displays to raise awareness of the live event and to ensure X Factor viewers are anticipating a TV commercial with a story they drive.
After the event, 60” and 30” TV ads will encourage viewers to visit youdrive.com/YOUDRIVE (a custom-built YouTube channel) to view all available films and drive their own A-Class story. Hidden within the online experience are details of the secret gig, and those who find them may enter a prize draw for the chance to win a new A-Class for a year, with odds increasing substantially for those who ‘share’ their experience on Facebook and Twitter.
David George, Marketing Director, Mercedes-Benz UK commented: ‘The new A-Class represents a new, younger, more dynamic Mercedes-Benz brand, which is reflected in this campaign. It's a modern Mercedes-Benz that encourages people to do what we know they enjoy; to get involved. In doing so, we hope to really cut through, and create a positive, lasting impression on their view of the brand.”
Ian Pearman, CEO, AMV BBDO, added: "AMV BBDO are proud to have created a first in social media and live TV programming for the new Mercedes-Benz A-class, allowing viewers to engage with the brand, and steer the direction of the ad. Mercedes-Benz A-class makes for a thrilling drive, and the launch advertising should be as innovative and exciting."
The teaser campaign launches 1st October, the first TV/Twitter event takes place on Saturday 6 October during the X Factor, and the campaign runs to 2nd December and includes TV, cinema, digital, press, poster and POS.
The new A-Class is on-sale now, with prices starting from £18,945.00 OTR. More information can be found at mercedes-benz.co.uk and http://www.youtube.com/youdrive.