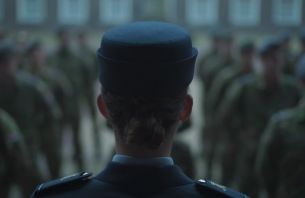 The Dutch Defence Academy is the central institute for educating and training new recruits for the Dutch Ministry of Defence. To speak to young people choosing a follow-up study after their secondary school, Amsterdam based agency Steam came up with a concept of a rough music video-like registration. A registration about leadership. About pushing through.

CZAR Amsterdam director Judith Veenendaal was put to the task to make this happen. Her visual style seamlessly fits the brief; the rawness and toughness are translated to the screen in a poetic yet straightforward way to really speak to the students-to-be. About half of the students on screen are female, half are male. By ending the film with a female leader to be, Judith Veenendaal addresses the current discourses and tells both men and women that they can achieve what they want. But it doesn't come naturally. You have to push through.

To get the most genuine effect, all locations in this film are actually at the Dutch Defence Academy.