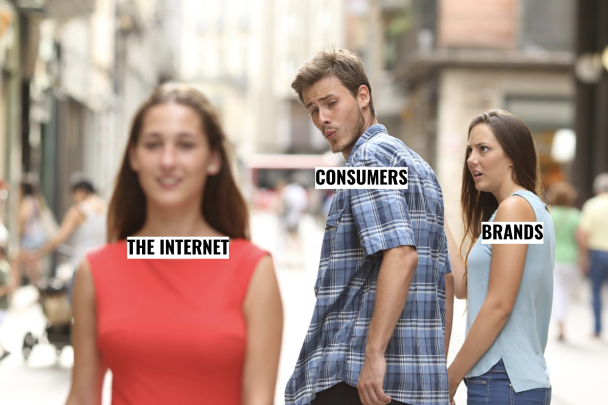 The opportunity for brands to impact culture was so much higher back when everyone was watching the same thing at the same time. Brands regularly created water cooler moments which could have a lasting cultural impact.

The internet has democratised influence and this has created an abundance of content, turbo-charging the pace of cultural change to light speed. In this age of abundance, attention is scarce and increasingly fleeting.

Take Avengers: Endgame. It was the highest-grossing movie of all time, yet it had barely a moment of the social sphere’s undivided attention before it was eclipsed by an episode of Game of Thrones and conversation duly switched to a conversation about who would win The Iron Throne.

If that can happen to the world’s highest-grossing movie of all time, how can everyday brands compete?

It's certainly very difficult for brands to impact culture if they try to do it alone, via traditional media. However, brands can increase their odds by partnering with those who are shaping culture to create exciting and innovative experiences in often surprising, non-traditional spaces.

We embraced this model to help AXE connect with Gen Z guys who spend the majority of their time on the internet and a fraction of their time consuming traditional advertising.

Music is a big passion for guys, and is also a natural environment in which they can move closer to those they are attracted to. To help them get closer, we built the AXE MUSIC platform. But to have an impact on culture, that platform needed to deliver real value. To achieve this, we partnered with those shaping music culture: the world’s number-one DJ Martin Garrix, Boiler Room, Kyra TV and Spotify.

The partnership with Martin Garrix was anything but a badging exercise as it involved limited edition products, music videos and competitions. So when we released the second music video of the partnership - featuring some of his fans, selected via a challenge on Instagram - 20,000 people were already waiting live on YouTube for it to drop.

But just tapping into your audience’s passion points through partnerships does not guarantee success. There are many pitfalls for brands in these new spaces, because people are even less accepting of brands when they venture out of their traditional advertising spaces. Therefore, it is paramount to really understand the environment that the audience inhabits and the related rules of engagement. A brand must also really earn the right to play and this isn’t something that can happen overnight.

When it comes to earning the right to play by creating value, Red Bull is the gold standard. However, it’s not enough simply to mirror what’s already out there. To make an impact in culture, brands need to create new value and that comes from powerful creative ideas. This is critical. In the age of abundance, your competition isn’t just other brands like Red Bull, but the entire internet.