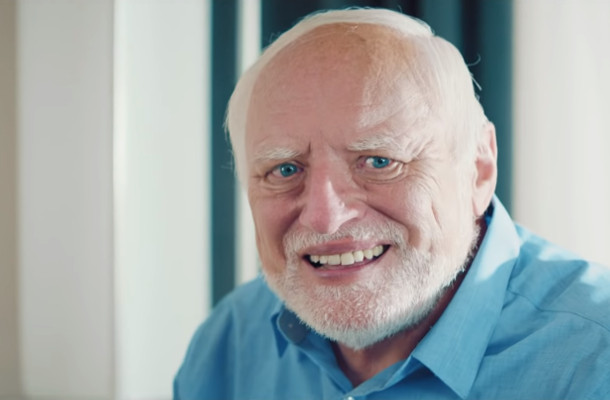 Hide the Pain Harold, a face made famous in an internet meme, has become the next cult star in an ad campaign for German online retailer Otto - the brand that once brought back obscure pop star Ricardo for a career encore.
The film, created by Jung von Matt/Saga casts András Arató, the Hungarian stock photo model with the fragile smile, as its star. In the online video, the protagonist needs to get an Acer Predator gaming laptop in time for Gamescom, which starts on August 21st. But for the delivery team, entering the meme star’s house soon turns surreal.
András Arató is a 73-year-old amateur model was once approached by a friend to take stock photos. Having been photographed in a variety of outfits, it quickly became apparent that these stock photos held a very special appeal for the online community. His unique smile seemed melancholic and somehow tormented, like a thin veneer of happiness stretched thin over a distressed soul. Thus, a meme was born.
In Otto's campaign the delivery team also notice this unique smile first. But while Hide the Pain Harold tries out his computer, they notice the many stock photos he’s starred in on his wall, seeing him dressed as a doctor, a gardener and even as a woman.
It’s a risky strategy from Jung von Matt/Saga that could be quite alienating for those not familiar with this particular meme. Then again, it is advertising a gaming laptop, so presumably the target audience is pretty internet savvy.
The campaign will run on YouTube, Facebook, owned and in-house media. The spot is supplemented by memes for the social media measures. In addition, a display advertising phase will follow that focuses on sales.
view more - Creative