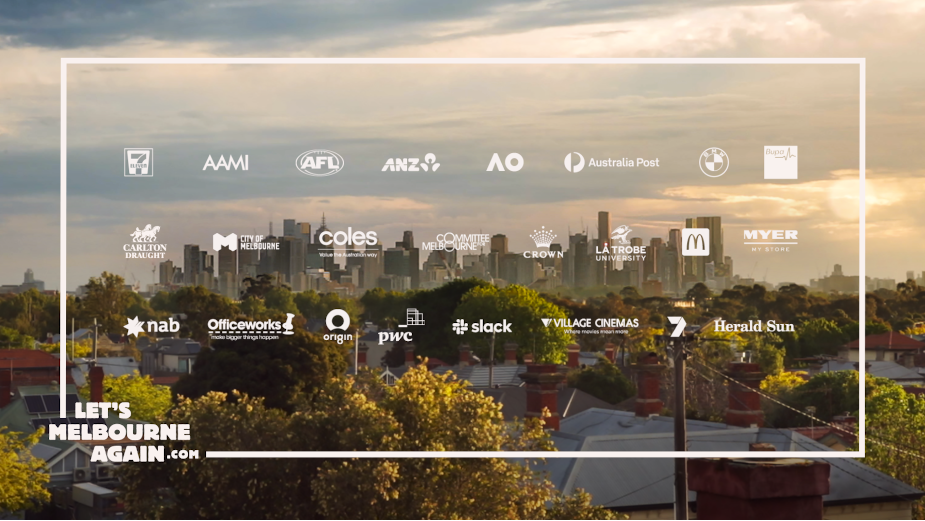 A consortium of Melbourne’s leading businesses have come together to launch ‘Let’s Melbourne Again’, an initiative designed for Melbourne, by Melburnians, to reinvigorate the city and support its economic and cultural recovery from the pandemic.

Developed by Clemenger BBDO Melbourne in partnership with leading media agencies PHD and OMD, the campaign was created as a restorative and reaffirming exercise. A group of Melbourne based filmmakers and photographers were asked to capture themselves preparing to emerge from lockdown to ‘Melbourne’ again, with the footage curated into a launch film by local director, Glendyn Ivin.

Narrated by Briggs, the launch film serves as an ode to all of the things Melburnians are looking forward to as restrictions ease across the city.

The campaign really hits its stride with the founding businesses each unveiling a series of initiatives over the coming weeks designed to bring joy to Melburnians and encourage the community to get out of their homes, back into the city and to help Melbourne get back on its feet.

Like the logo framing device, the whole spirit of ‘Let’s Melbourne Again' is to shine a light and quite literally frame all that we love about this city. As Melburnians head out again, they’re encouraged to celebrate the city by using a Let’s Melbourne Again Instagram filter and follow and tag on Instagram.

Clemenger BBDO Melbourne CEO, Jim Gall, said: “We’ve all seen firsthand the impacts of Covid-19 on our community and on the businesses and institutions that make Melbourne the incredible city it is. As a creative company that’s served the Melbourne community for 75 years, we knew we had to do something - 'Let’s Melbourne Again' is a rallying cry for Melburnians as we work together to bring the city back to life and back to the Melbourne that we all know and love. Over the coming weeks and months, the businesses supporting 'Let’s Melbourne Again' will be creating brilliant acts and experiences designed to spark joy and support the city’s economy - stay tuned for the announcements of those initiatives and for further information about how Melburnians can participate.”

PHD’s general manager, Simon Lawson, added: “Victorians have been incredibly resilient in the face of this pandemic, and as we get closer to our new Covid-safe normal, we need to take a moment to celebrate Melburnians and the city we all love and use this opportunity to build the anticipation and excitement of getting back out there and supporting Melbourne’s return to the vibrant city that we know it to be.”

The campaign is supported by a wide range of founding, supporting and media partners, including:

In addition, the campaign will look to support the city’s small business community by providing free access to ‘Let’s Melbourne Again’ collateral and support to provide their own unique offers for customers returning to the city.

For members of the community who are experiencing nervousness or concerns  about getting back out following the easing of lockdown restrictions, Beyond Blue is supporting Melburnians and small business owners with a range of free resources and services, available on its website and via phone at 1800 512 348.

The campaign is being conducted with full consideration of current Victorian Covid-19 restrictions, as the safety of Victorians and continuing to slow the spread of Covid-19 remains the number one priority.