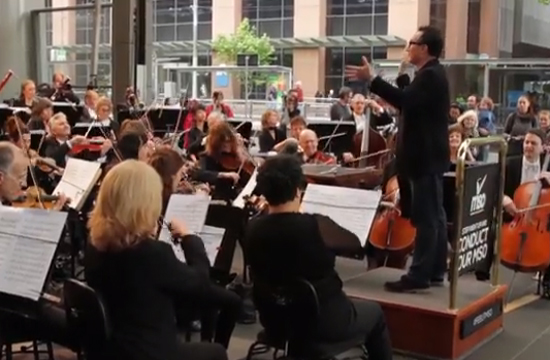 Tonight BWM Group’s Sputnik Agency is launching a unique campaign for the Melbourne Symphony Orchestra (MSO) that uses footage from an inner-city activation in Melbourne that caused a stir in the city and made International headlines.

The new ‘Don’t Just Hear It. Feel It’ TVC and extended online film captures the awe and wonder of surprised commuters at the activation at Southern Cross Station on Monday 21 October.
Sputnik and the MSO collaborated for months to turn the station forecourt into a ‘concert hall’ where lucky commuters, from toddlers to the elderly, had the chance to take turns conducting of 44 members of the MSO, who performed excerpts from Beethoven’s Symphony No.7.

The event made news headlines with features in The Age and Herald Sun syndicating nationally. It also generated broadcast coverage with television stations filming the event and radio stations interviewing the ‘conductors’ of the day. There was a flurry of excitement generated on social media with @melbsymphony the number one trending topic on Twitter in the morning and #feelitmso trending at #2.

“Making our music accessible to everyone who wants to hear it is one of our most important goals. We hope our 2014 season will give all Victorians the chance to come and experience the unforgettable passion and excitement that comes from witnessing the MSO in partnership with some of the world’s greatest musicians,” said MSO Managing Director André Gremillet. Sputnik’s Head of Strategy, Eaon Pritchard, said “While the MSO is one of the most well attended arts companies in Victoria, there is still a broader untapped audience.

“With this campaign we wanted to demonstrate that you shouldn’t need a deep understanding of classical music to go and be part of it – and this is at the core of the campaign – it’s an experience that you feel. The activation aimed to widen the appreciation for MSO by breaking down barriers and make it accessible to everyone,” he said.

Sputnik’s Creative Director, Mike Lee, said: “If there’s a stigma that classical music can only be appreciated by the 'elites', it needs to be challenged. And what better way to democratise this art form than to provide a once-in-a-lifetime opportunity to let Victorians themselves conduct their Orchestra.”

The TVC and online film was produced by Melbourne based Truce Films, this year’s winner of TropFest 2013.

Director Nicholas Clifford, said: "Any time you have an opportunity to engage with the public and capture their emotions at such a raw level it is an exciting prospect, because you never really quite know what you are going to get.

“Having the opportunity to direct a project that captures the genuine joy that the public experienced with the MSO was something I was always going to throw myself into.”