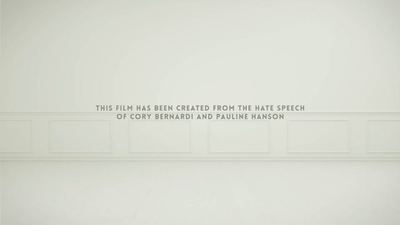 In a campaign that aims to unite where others try to divide, J. Walter Thompson Melbourne has brought the message of the Melbourne Queer Film Festival (MQFF) to life in a glorious visual celebration of colour and energy.

Using voice data from the hate speech of Cory Bernardi and Pauline Hanson to inform the animation of MQFF's new brand icon, the campaign takes negative messages and turns them into art, telling a visual story of strength and love.

The resulting 30 second film launching as a cinema trailer this week, turns the tables on a hostile and conservative political agenda to demonstrate MQFF's ability to overpower hate with inclusive stories that promote tolerance and diversity.

Says Dillan Golightly, executive director, MQFF: "JWT's cinema trailer for this year really drives home the transformative power of queer cinema and MQFF. Taking homophobic and transphobic comments from politicians and turning them into a

beautiful piece of animation is a great expression of resistance and hope."

The film combines audio visual technology and art in new ways to deliver a strong and powerful message. J Walter Thompson called on the talents of Berlin 3D designer and visual artist, Bernd

Marbach, who isolated a number of pieces of speech from both Bernardi and Hanson and built a data profile from them that became the basis for the animation. He then set to work with J Walter Thompson Melbourne to find the perfect visual style to represent the soundbites in a way that overcame their hateful content with something strong, colourful and beautiful - thus representing what MQFF stands for.  The campaign's tagline is further representation of this concept: When the agenda is to divide, we need stories that unite.

Says Kieran Antill, ECD, J. Walter Thompson, Melbourne: "This is a simple idea told powerfully and frames the reason why festivals like MQFF are so important - so if you are in Melbourne attend and if you aren't in Melbourne, Jetstar.com"

To complete the project, the agency also called on the services of Cornel Wilczek, founder of Electric Dreams studios and an award winning composer and music producer who is driven by experimentation with sound data to create something new in music.

According to lead creative team, Jim Walsh and Jess Lilley: "Wilczek was able to find rhythm in Bernardi and Hanson's speech, transforming it into a soundscape that is at first sinister but then builds into something far more celebratory, as tones taken from the vocal tracks ultimately drown out the speech patterns themselves."

Says Antill: "These layers of experimentation with visual art and sound create a unique piece of film that tells an important story for MQFF in a hostile political environment. This ongoing push into design and art innovation is something we are focusing on as a creative agency creating highly expressive bold work for brands."

Adds Walsh and Lilley: "MQFF isn't just another festival on the Melbourne calendar, it's a necessary show of cultural solidarity in the fight against intolerance and fear. People need to see that and support it."

The campaign runs until March 27th.