LBB’s Addison Capper chats to Cummins&Partners, Clemenger BBDO and Passion Pictures to get the lay of the land in Melbourne in 2016 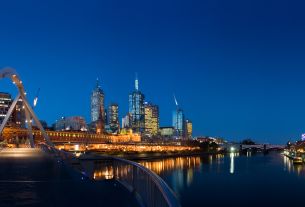 It’s no big secret that Melbourne is a ‘creative’ city; for years now, in trade press and mainstream, that has been well documented. Widespread change and regeneration since 1995 has lead the Victoria capital to being named five times as the most liveable city in the world, and more recently it was nominated as one of the first United Nations 'City of Literature'. It has been officially acknowledged as having the best artistic community and institutions in Australia.

Historically, the advertising industry in Melbourne was dominated by one or two big players – both within the agency and production landscape. But that’s changing, believes Jim Ingram, Partner and ECD at Cummins&Partners, which was founded in Melbourne in 2011. “There seems to be more choice these days,” he says. “There are still the big agencies that are still very strong, but there’s more and more great creative agencies starting to find their feet and make their own mark on the industry. And that goes across all facets of our industry too, from media companies, to production companies, to edit facilities and sound studios. It’s great for the industry as it means there’s more and more choices for great creative people to find their perfect fit.”

What’s more, the city is also seeing more clients setting up shop locally. Much of the country’s brands and media outlets are traditionally housed in Sydney and, as such, it is traditionally the stronger market. “But more and more big, national (and even global) companies are setting up in Melbourne as their home base,” adds Jim. “I don’t think there’s a ‘more creative’ city [between Melbourne and Sydney], but there’s certainly a balance with size and scale of client coupled with the creative output. In general terms, it’s easier to get more creative ideas from smaller, more nimble clients – which incidentally is why I think New Zealand punches well above its weight, but that’s a whole other debate…”

In addition to Jim’s comparison to New Zealand, another location that crops up in conversation when chatting to Melburnians is San Francisco. Both cities are less bound by ‘big city’ constraints, such as Sydney, LA or New York, “which leads them to being petri dishes for interesting ideas and projects,” believes Passion Pictures Melbourne EP / MD, Katie Mackin. “I think that being regarded as the metropolitan equivalent of the ‘errant cousin’ or ‘crazy aunt’ within a nation can only be a good thing, creatively!”

“San Francisco does get mentioned as a point of comparison,” adds James McGrath, Creative Chairman at Clemenger BBDO Melbourne. “A little because of the relatively humble industry of the city, we are working at things, to make our lives better, to satisfy ourselves, to live up to our expectations. Without the geographical beauty of Sydney, Melbourne is a city you have to commit to for other reasons, you have to believe in the idea.”

Another bonus of not being bound by big city constraints is the vibe that comes with it. Locals are proud of the community vibe within the industry and believe it leads to both friendships and work opportunities.

“There’s a terrific community feel here in Melbourne,” says Jim from Cummins&Partners. “I think it’s because the weather’s so shit, which means we have to gather together indoors more often, which in terms leads to thinking about ideas together and sharing war stories.”

“Certainly it’s been my experience that the network we work within has a brilliant community vibe,” says Katie from Passion. “We’re always on the lookout for new people to collaborate with and we’ve made some brilliant connections along the way; people that you tend to turn to consistently when puzzles need to be solved - kind of the creative equivalent of borrowing a cup of sugar from your neighbours!”

And the sense of community stretches further than the perimeters of the ad industry, reaching all of the city’s creative sectors. “There is a sense of community within the creative classes of Melbourne, more so than within the confines of advertising specifically. We cross reference and feel influence less through discipline but more through innovation and interest.”

What’s more, local award show MADC (Melbourne Art Directors Club) hasn’t happened in the past five years - but that hasn’t stopped peers getting together. “I would say the ‘club’ is as strong as ever,” says Jim. “In fact, for the last two years we’ve hosted the MADC after party (the best bit of any award show) without actually having the awards, and both occasions have been sold out within days.”

These opportunities and the working life are leading more talent - both local and international - to the city. Melbourne boasts a higher rate of immigration than Sydney, and a demographic study has stated that the city could overtake Sydney in population by 2028.

However, James from Clemenger (who has lived in Melbourne his entire working life) does believe that Sydney appeals more overtly as a destination. “We are an acquired taste,” he muses.

But it’s the return of those that had previously left that has Jim from Cummins&Partners most excited. “There’s loads of international talent coming into Melbourne - the funny thing is that they’re all Melburnians. There was a big exodus a few years ago with lots of our great thinkers fleeing to find greener pastures, mostly over in New York. And for lots of them they found what they were looking for,” he says.