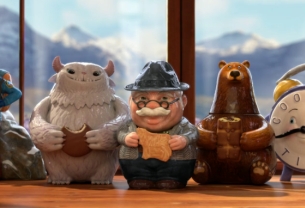 Milka follows the launch of its new global brand platform - Tenderness Is Inside, with a pan-European campaign that sees fans being able to get their hands on Milka’s new biscuit jar characters.

Rolling out from today in more than 20 countries across Europe, a core trailer sets up the concept, while five further films each introduce one loveable character and their favorite Milka biscuit; we meet the handsome and fearless mountaineer Anton, the anxiously waiting Cookie Time clock, glitz and glamour loving Fluffy, wise and sweet Grandpa and the always hungry Mama Bear. By liking the film of their favorite character on Facebook, fans go into the draw to win a real-life, limited edition, ceramic biscuit jar – with thousands to be won across Europe.

Created by Wieden+Kennedy Amsterdam, the digital activation is part of a fully integrated campaign for Milka Biscuits that launched earlier this month with the release of the Biscuit Jar, which previewed the five animated characters. The TVC was one of two films that launched Milka’s first-ever global brand platform - Tenderness Is Inside; a bold move for the iconic brand that sees communications united both globally and across its chocolate and biscuit categories.

Charles-Henri Casala, Europe Treat Biscuits Base & Equity Marketing lead, says: “Following the successful ‘Tenderness Is Inside’ platform launch we are excited to enrich the ‘Lilaberg’ story with our Biscuit Jar characters. Each of our loveable jars is the proud ambassador of a specific product within our delicious Milka biscuits portfolio, showing our range diversity in a playful way while increasing resonance across our scaled audiences in digital.”

The six films for the digital activation can be found now on Milka’s European Facebook and YouTube pages, with fans able to vote for their favorite on Facebook. In addition to the films, YouTube and Trueview pre-roll and Facebook cinemagraphs will also encourage fans to vote and be in to win a chance to take home their very own biscuit jar. The overall integrated campaign also includes out of home and point of sale advertising across Europe.

Daniel Schaefer and Szymon Rose, W+K Amsterdam Creative Directors, say: "Who are the ultimate experts in biscuits? Biscuit jars obviously! Who knows biscuits better than them? So we created a bunch of biscuit jars to become the testimonials for our campaign. For example Anton, our brave mountaineer, who doesn't care that his leg is permanently attached to a mountain. Or Fluffy, probably the most narcissistic little monster you've ever seen. They're lovable and sweet, just like the Milka Biscuits they advocate. Perfect ambassadors for Milka's new brand platform 'Tenderness is inside'.”

The digital campaign rolls out from today across more than 20 countries, including Germany, France, Poland, Italy and Spain, with over 3,000 Milka Biscuit jars to be won. Dates per market vary so fans are recommended to check their local Milka Facebook page for more details.