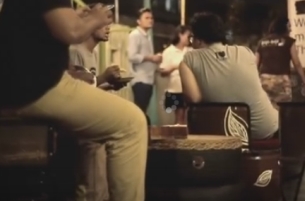 In January 2016, Mini announced their new communications partner in Saatchi & Saatchi Malaysia. It was an exciting win for the agency with exponential potential for great work with an icon like MINI.

The recent launch of the new MINI Clubman presented Saatchi & Saatchi Malaysia the perfect opportunity with the agency developing two digital films ‘Hit Chaser’ and ‘Things Maker’ as part of the launch.

According to Sathi Anand, Executive Creative Director of Saatchi & Saatchi Malaysia, “The launch of the unique new MINI Clubman gave us a real chance to collaborate with young people who have the knack for the unusual. There is this great movement of collective consciousness at the moment, through various independent, unconventional pursuits.”

“We are thrilled to be able to bring that to light via this brand, that has been an icon over the years. From pitch work to final execution, the client remained true to the idea of ‘Go With Your Gut’. An idea that really allowed us to immerse ourselves in modern Malaysia and celebrate the endeavours of a growing group of young, energetic urban Malaysians, known as the ‘Creative Class’.