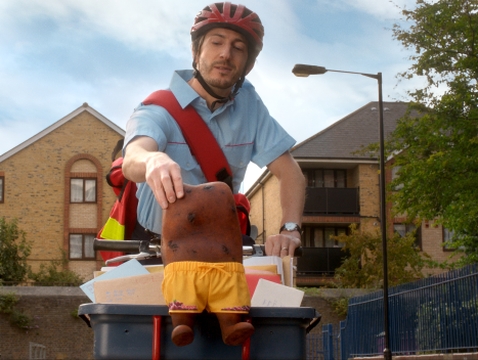 Soreen, the 75 year old malt loaf brand, has launched a national repositioning campaign – spending over 3 million for the first time in over a decade - to reinforce its position as a versatile snack with substance.

The new ad, created by The Red Brick Road, features a live-action puppet, The Loveable Loaf, and addresses the brand’s barriers to purchase; relevance, range awareness and usage occasion, emphasizing to consumers that Soreen is a healthy, versatile snack of substance.

The 30 second TV ad, directed by Joseph Mann through Blinkink, sees The Loveable Loaf stride out of the Soreen bakery, nearly knocking a postman off his bike, before slowly shrinking in size sharing his deliciousness with ifferent people who tear off and enjoy bite-sized chunks to see them through the day. The ad ends with the Loveable Loaf back in his packet, with the rest of the range, back at the Soreen bakery.

The Loveable Loaf’s versatility is highlighted as he is eaten by people from all walks of life from children, to racing cyclists, to office workers and combined with various toppings including cheese and more traditionally, butter.

Soreen sales have risen 57.8 per cent over the past three years as the brand has added ‘food to go’ and breakfast products to its core lines; and the new TV advertising campaign supported with a media budget of £3 million is set to raise the bar further.

Paul Tripp, UK Managing Director of Soreen, said: “The campaign idea will show consumers that Soreen really is a versatile snack with substance.

We know that consumers are faced with a daily challenge of choosing snacks that are healthy, tasty and genuinely filling. Our new TV campaign features 'The Loveable Loaf' character that kids and adults can enjoy.

We have already seen the brand grow in popularity with the introduction of new variants and we are looking forward to seeing this continue with the launch of our first national TV campaign in over a decade.”

David Miller, Managing Director at The Red Brick Road, said: “Soreen is a brand that everyone recognizes and has fond memories of. We feel that this new campaign has a brilliantly broad appeal and we are delighted to be part of the first campaign in 10 years”

The advertising campaign will be supported by a mix of PR and social and digital activity. The new ad will air for the first time in the evening of the 6th October and will run during prime-time spots, including during ‘Come Dine With Me’ on Channel 4 and ‘Emmerdale’ on ITV.