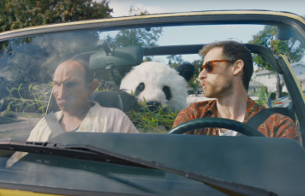 The new Super Bowl commercial is called “Good Morning” and introduces a new character who personifies the Internet, and the idea that no one knows the Internet like GoDaddy. The thirty-second spot is a rollercoaster ride of Internet gags with a product payoff.

At the heart of the long-term campaign is promotion for GoDaddy’s innovative GoCentral, a new service that combines a mobile-optimized website builder with an integrated set of marketing and e-commerce tools to help get people’s ideas noticed online. GoCentral’s smart learning technology means that users don’t need technical skills in order to build their professional website in less than an hour, even on a mobile phone.

“Our new GoCentral service deserved a Super Bowl-sized launch, and our ‘Internet’ character definitely delivers,” said GoDaddy Chief Marketing Officer Barb Rechterman. “Think about how the Internet, universally, changed how we live, work, shop, communicate, connect and entertain. We pay homage to so much of that in our new Super Bowl spot, which is packed with visual humor aimed at men and women of all ages. In fact, we came home with enough awesome footage for two or three commercials – we’re saving the best of it for a special Super Bowl Sunday Internet-Only version at GoDaddy.com.”

See if You Can Find All the Gags

Viewers will be challenged to identify the dozens of visual Internet references and tech gags packed within both the Internet-Only and broadcast version of the production. The so-called “Easter eggs,” or hidden references, are designed to appeal to women and men of all ages, and include cats on Roombas, a sneezing panda and a nod to the Grace Hopper Celebration of Women in Computing. Watch for the shower scene, where a play on the ice bucket challenge is featured. The “Internet” delivered his two-shot shower scene in the first two-takes, insisting on real ice.

GoDaddy unleashes its extended “See More Now” Internet-Only version of the video at GoDaddy.com Super Bowl Sunday. Also during the game, “The Internet” and GoDaddy will be engaging with viewers in real-time on social media. The campaign goes beyond the game online and on television, as well as in social media, with Onion Labs at the Onion who will serve up their engaging brand of humor with “The Internet” in the months ahead.