Awards and Events 679 Add to collection 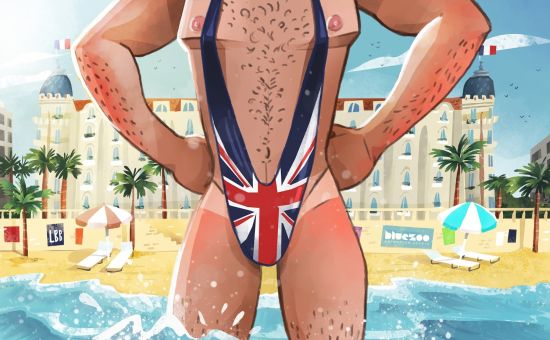 Are you feeling CANNES-tastic? Because we are. And the co-hosts of the LBB & Friends Beach have been getting in the mood too in preparation for a big week ahead. From dancing cocktails to rose-stocked fridges, they’ve been embracing the Riviera mindset before even setting foot on the Croisette.
If you’ve been invited to the LBB & Friends Beach, we hope you’ll join us in thanking the co-hosts who have made this all possible. Without them and their generosity and sheer exuberance, the Croisette Beach opposite the Miramar would be another (rather lovely) Cannes beach and restaurant. Instead it’s going to be packed with activities, from yoga to massages and VR experiences, a bubbling hub of networking, socialising and seaside fun.
As you can see, they’ve been having a blast preparing for Cannes and have been sharing some sneaky peeks at some of the swag on offer:

Jungle's stylish pink specs are sure to be a hit on the Croisette... but perhaps less useful in a very, very (seriously VERY) rainy Soho. Jungle and Native are also going to be putting on the ever-popular Hanging Gardens at the beach. Massages and charging for weary bodies and weary phones.

All work and no play make for a dull Cannes, so Burger Films are bringing down some nifty frisbees.

Already in the sunny, summer mood, LIA's Laurissa Levy is getting her base tan sorted as well as showing off the ever-popular LIA beach towel (so no need to panic if you forgot to pack your own!)

Right. Believe us. In between all the rose you should probably try and get some water! The Good Film Co is bringing some handy water bottles down, as demonstrated by the handsome canine model.

Orrrrrr.... just go straight for the pink stuff? Focus Music knows what they're doing! Thanks to them and the other co-hosts, the wine and beer will be flowing at Happy Hour between 4pm and 6pm.

Cavendish Music will be making the most of the spectacular view this year - here's Joanna demonstrating the snazzy beach binoculars.

It may be grey in London, but LS Productions' Meriel Bunney-Gillies has been practicing for the beach.


the STUDIO has created a colouring book of Jury Presidents - and some awesome animations to go with them. We'll keep you posted throughout the week on Instagram, but here's Direct President Mark Tutssel to get you started...

Shall we see you for a cocktail? Taylor James hopes so with this eternal swirl of alcoholic goodness! 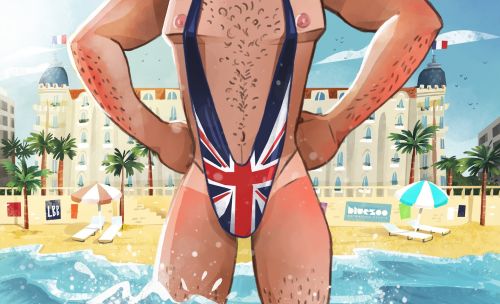 Oh my WORD. Bluezoo are embracing a rather fetching Union Jack mankini look on the LBB & Friends Beach this year. And we can't blame them, it is, frankly, awesome.