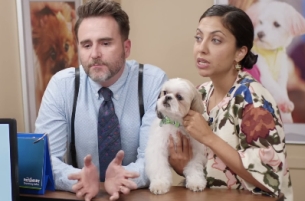 GO director Christopher Guest takes a canine spin on high fashion in the latest round of spots in the humorous “Partners in Pethood” campaign for PetSmart out of GSD&M, Austin, TX.

The spots harken to the quirky pet parents in Guest’s Best in Show and depict the fashion fanatic “Avant Guardians” of a coddled Shih Tzu that they wholeheartedly believe shares their taste in style. Between claiming that the sidewalk is their dog’s own runway, to insisting that other jealous pups do a “doggy double-take” when admiring his good looks at the park, this fashion forward couple unapologetically takes their pet parenting to an obsessive level.