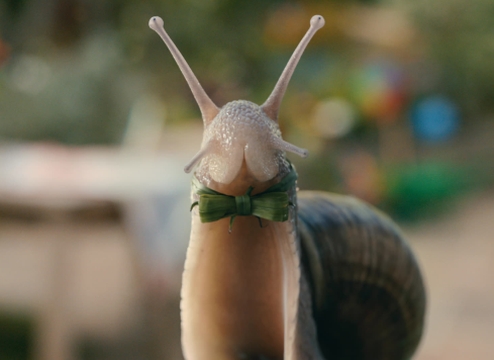 Framestore created Sheldon, the Corrie-loving snail whose life is transformed by Freesat’s Freetime service, for this new campaign by TellyJuice and director David Skinner.

The team was led by VFX Supervisor Russell Dodgson, with CG Supervisor Grant Walker responsible for the build of Sheldon, which achieves such a beautiful level of detail thanks to the use of some 8K textures.

The animation was lead by Juan Sebastian Nino, who was tasked with pulling off the gags while finding a balance between human-like reactions and snail-like realism. It was colour graded by Edwin Metternich.

"Framestore were legends to work with. From the off they were clearly the best post-house on many levels. Their service and client management was second to none, they added a huge amount of creative ideas to the initial concept, but above all they produced a very high end piece of work that the client was blown away by," said TellyJuice Creative Director Dave Toomer.

We see Sheldon slowly creep up a watering can spout as the seasons change, with each bringing its own small challenge. "In the winter sequence for example timing was important as we needed to fit in his tail freezing and his sneeze - if they overlapped we knew we'd lose both jokes. While the rain was difficult because of the water elements on his shell, which were created in 2.5D by Jesse Spielman," explains Russell.

"TellyJuice were lovely throughout the process," says Russell. "What's really nice about this job is that it relies on the staple aspects of what we do: brilliant animation, brilliant rendering and great compositing. There are no big camera moves to hide in, no crazy shots that will always look a little odd, just simple, nice storytelling with a beauty character right up close to camera."