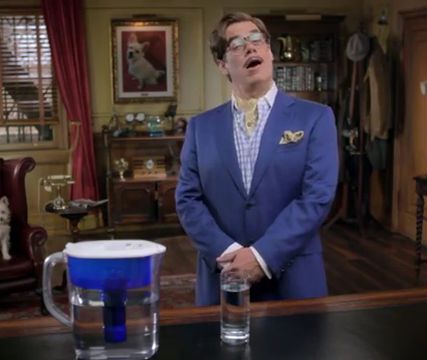 PUR Water Filtration, from the Kaz division of Helen of Troy Limited, is proud to announce the rollout of a bold new creative marketing campaign, which is the first new campaign for the brand since 2008. The new PUR creative will also trailblaze for the category as the first to feature a real-life character – an eccentric, self-appointed water critic named Arthur Tweedie who will help create awareness and educate audiences about PUR's superior filtration technology.

The goal for the new campaign is to elevate the importance of water filtration in a fun and light-hearted way by incorporating humor into the conversation and introducing tongue-in-cheek "water critic" expertise into consumer culture. These YouTube style television spots will pin PUR against alternatives, including leading competitors. As the centerpiece of the digital and TV advertisements, Arthur Tweedie will act as a catalyst to help consumers question the quality of their drinking water and educate them that tap water may contain various contaminants such as lead, heavy metals, microbial cysts and by-products from chlorine.

"We wanted to make a bold statement about PUR as a category leader and expert in the removal of drinking water contaminants," said Brian Carboni, Marketing Director at Kaz Inc. "We think our new creative will grab people's attention and educate them, through the lens of comedy, about the benefits of superior water filtration."

"Arthur is unlike typical spokesmen characters in that he's presented as a third party or outside critic of all things water, rather than a PUR employee or salesman," said Craig Miller, SVP/Group Creative Director and campaign lead at Arnold. "He's eccentric, which isn't the norm for brand characters. But he's lovable, he definitely knows his water and he will hopefully give people a new and fun perspective on the role PUR's superior water filtration can play in their everyday lives."

PUR's new creative campaign is just the first step in a larger rebranding effort that will be announced next month, which will include major changes at shelf.  However, what will remain the same is PUR's commitment to making faucet mounts, pitchers and a dispenser with superior filtration technology. PUR faucet mounts reduce 10 times more contaminants than the leading pitcher filter.