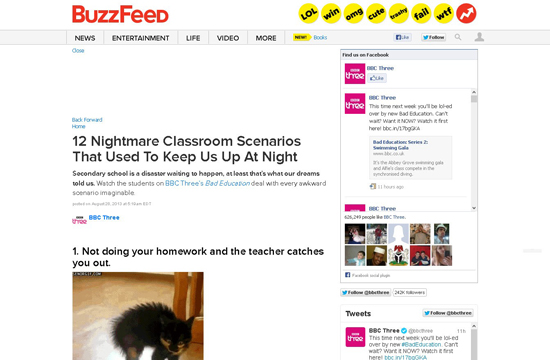 MEC, a leading media agency, today helps BBC Three launch the second series of Bad Education with a new campaign ahead of its 3rd September transmission date. The programme, which stars Jack Whitehall, returns after a successful first season in 2012.

The campaign, which launches on Wednesday evening, 28th August and runs until the 15th September, targets 16-34 year olds with an interest in comedy TV content. The objective of the campaign is to retain the current audience while focusing on drawing in new viewers through fresh, new, shareable and special content.

MEC brokered a unique partnership for the BBC with BuzzFeed to create, in conjunction with Red Bee, exciting, engaging and shareable content for the campaign to go directly onto the BuzzFeed platform. Following the theme of the show – a hopeless teacher trying to muddle through his career – a series of articles will engage viewers by utilising school situations that evoke an emotional reaction from the target audience.

In addition, MEC also planned the complete advertising campaign. While also being supported by the BBC’s owned inventory (TV and radio channels), it will appear across other online display adverts. High impact formats will run across the Woot network on comedy focused sites such as The Daily Mash and The Poke. Alongside this, interactive pre-roll will feature on comedy and entertainment sites through Inskin, and YouTube and Facebook will also be used to activate the campaign.

Mick Style, Managing Director, MEC Manchester, commented: “An entertaining show deserves to be promoted in an entertaining way and with this in mind, we have come up with a campaign that we feel really fits Bad Education. Our collaboration with BuzzFeed showcases the show’s humour in a format specifically designed to appeal to the social generation and will create enormous talkability that we’re sure will encourage new viewers to come and see what the programme is about.”