MEAT: Delving into the Seedier Side of Berlin 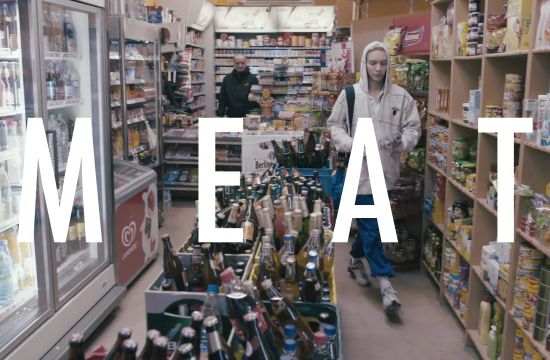 From Shakespeare’s Titus Andronicus to Sondheim’s Sweeney Todd, it seems that cannibals have always been a rich feeding ground for dramatists on the hunt for ideas. But a project in Berlin, inspired by Luka Magnotta, the alleged man-eating murderer who was arrested in one of the city’s internet cafes, takes theatre goers on a more intimate, abstract and immersive exploration than anything before it. MEAT is a 240-hour long piece of experiential theatre from Thomas Bo Nilsson that invites viewers into some of the darker shadows of Berlin and examines human appetite in all its forms.

Though triggered by Bo Nilsson’s experience living near to the café where Magnotta was apprehended, the project promises to be no mere re-telling of events. Rather it’s a richer and more subtle exploration of sexuality and appetite and our relationships with our online selves.

The event is due to begin on April 3rd but director Matt Lambert has created a tantalising appetiser, a trailer that invites viewers into the world of one of the 60 characters who populate MEAT’s universe. The promo follows the young man from a shop to a bar and Internet café and gives an intriguing and haunting peek into his inner world.

The promo is an interesting collaboration, between Lambert and Bo Nilsson but also between the worlds of theatre and film. Inviting viewers into the headspace of a young man who frequents this particularly seedy internet café, it also offers them a chance to understand and experience the character through different perspectives. It's been a chance for Lambert and Bo Nilsson to play with the boundaries of multi-platform storytelling.

It also invites contrast between the raw and direct experience of attending the event and the more stylised view through the camera’s lens. Indeed this idea of fractured, fragmented ‘selves’ runs right through the project, with characters existing online in video clips and profiles. It’s inspired by the stories that Magnotta himself had over 70 Facebook accounts.

For Lambert, a commercial director represented by Stink Berlin (who produced the trailer) and by White Lodge in the UK, the promo fits into his growing oeuvre of personal that explores youth culture and sexuality in an increasingly hyper-connected yet fragmented world. “It's part of an ongoing series of work that explores the fragmentation of identity and youth sub-cultures and sexuality in the exponentially expanding global landscape. Sexiness aside, it has some real cultural resonance as well,” he explains.

Meat will be open between April 3rd and 13th at Schaubühne Berlin and will be live streamed online.