Meantime Shows They 'Mean It' with Launch of New Campaign

Above + Beyond creates outdoor media, digital and social campaign 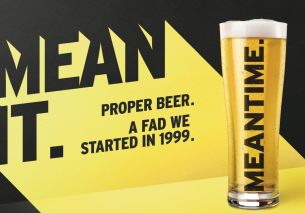 Launched this week, the ‘MEAN IT.’ campaign features a series of out of home ads that place Meantime’s core beers centre stage, complete with taglines that express the Greenwich based craft brewer’s belief that if you are going to brew a beer, you should brew it properly.

Capturing the passion and personality of the brewer, who have been pioneering the British craft movement since 1999, MEAN IT. takes inspiration from Meantime’s own history – highlighting the fact that they spend six weeks brewing each of their beers in the heart of London, and make ‘proper beer’ as a result.

A bold step up from previous campaigns, MEAN IT. remains true to the brewer’s founding belief that good beer comes from going the extra mile. Born out of a commitment towards continual innovation and brewing the best beers possible, each Meantime beer is brewed in the capital with the best possible ingredients, and matured for the time it needs to ensure optimum flavour.

Created with Meantime’s newly appointed creative agency Above + Beyond, the month long campaign launches across outdoor media, digital and social, setting the scene for further as yet unannounced activity across the rest of 2016 and throughout 2017. Beginning with authorised fly-postering and strategic takeovers of out-of-home sites across key areas in the capital including the iconic mural on Shoreditch High Street, MEAN IT. will be rolled out digitally nationwide.

Rich Myers, Marketing Director of Meantime Brewing Company, says: “From the moment our founder Alastair Hook brewed the first pint of Meantime back in 1999, we have been singularly focused on creating the best possible beer. Our desire to brew something better than before has been encapsulated by the MEAN IT. campaign in a simple but bold way. This unflinching and uncompromising belief that we should be brewing authentic, innovative and perception changing beers is something that has subsequently defined and pushed forward not only our brand but also the Modern Craft category in the UK.”