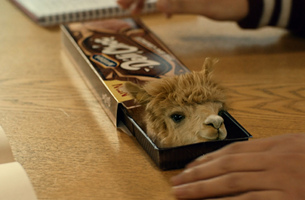 United Biscuits has today launched the latest ad in the iconic McVitie’s sweeet™ series for its brand new biscuit, DeliChoc. As well as the new, crunchy biscuit topped with luxury Belgian chocolate, the ad introduces a brand new member of the sweeet™ animal family – the alpaca.

The new 30 second advertisement will air on Wednesday 1st April on high profile channels such as ITV and Channel 4 to support the launch of McVitie’s DeliChoc in to the UK.

The alpaca represents the overwhelming delight consumers feel when they bite in to this intensely crunchy McVitie’s DeliChoc biscuit, topped with either milk, dark or white Belgian chocolate, and a brand new product for the United Biscuits portfolio in the UK.

The advert opens with a group of students studying in a library – as the students take a break they open a box of McVitie’s DeliChoc, and as they slide open the tray, out pops a very cute alpaca to the theme tune of popular 1980s TV programme Grange Hill. The students then proceed to tickle and cuddle the alpaca, as others emerge to join the gang. These cute animals then start to create a real ‘crunchy commotion’ as they munch on pages of books, and even the leg of a chair.

Suddenly there is a loud crunch of the McVitie’s DeliChoc biscuit being broken in two, and the alpacas disappear, leaving the students to enjoy their sweet treat in peace.

The £1.7 million advertisement campaign, created by Grey London and advert directed by NEO, is the latest addition to the McVitie’s sweeet™ advertising campaign which launched in February 2014, and has seen a total investment of over £17 million in a bid to modernise and drive fame for the brand.

UB Sweet Biscuits Marketing Director, Sarah Heynen said:“We had a fantastic response to the McVitie’s sweeet™ masterbrand campaign last year, with sales growing by 3% across 2014 and a 26% rise in the McVitie’s value share of the total biscuit market.

“Consumers love the cute animals we have used for our masterbrand campaign, from the cuddly puppy in the Digestives advert, to the cheeky owl for BN, which represents the feeling we get when we eat a McVitie’s biscuit.

“We’ve decided to introduce the alpaca in to the fold, as the star of the new McVitie’s DeliChoc advert, to represent the overwhelming delight consumers feel when they bite in to this intensely crunchy, chocolatey biscuit.

“Our aim is to extend the McVitie’s Masterbrand into new eating occasions by offering even greater variety to consumers – the launch of new McVitie’s DeliChoc in to the UK will provide a great alternative sweet treat to many traditional products available. We hope that the launch of DeliChoc marks the beginning of another fantastic year for McVitie’s.” 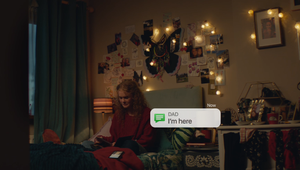