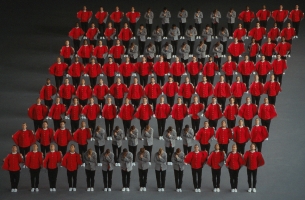 mcgarrybowen London’s latest campaign for Honda launches today, introducing the Honda HR-V to the popular subcompact SUV market. Aimed at young families and pre-family couples, the all-new HR-V is one of the most hotly anticipated car launches this year.

The pan-European campaign is built around a visual celebration of Honda’s belief in engineering perfectionism. The concept was born from the fact that the HR-V was rigorously designed to be perfectly in step with people’s lives.

Inspired by the Japanese art of “precision walking”, the 60 second film speaks to the HR-V’s design philosophy. It’s a meticulous arrangement of people perfectly choreographed around the HR-V’s movements. The film concludes with the line “Precisely, Pleasingly, Perfect”.

Jemma Jones Department Manager, Marketing Communications at Honda Motor Europe adds: “We set out to enter the competitive segment with a bang and I believe we have achieved exactly that with our new campaign. In this spot, we see the HR-V make its TV debut as the conductor of a precision walk like no other! We are extremely proud of this production which delivers against Honda's brand values of imagination, innovation and excitement.”

Paul Jordan, ECD at mcgarrbowen London: “The HR-V has been designed to fit perfectly into people's lives. So the work we’ve created is all about things that are perfectly arranged and how they makes us feel.”