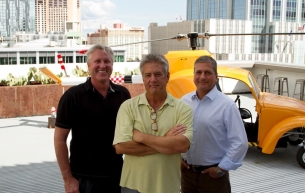 McGarrah Jessee has partnered with award-winning director Jeff Bednarz, formerly of Lucky 21, to launch Rabbit Foot, the agency’s new film and production division. Bednarz will apply his deep career experience as a director, production company owner and brand collaborator to his new role as Creative Head of Production at Rabbit Foot.

“This is a new venture based on a long and respected partnership,” says Mark McGarrah, co-founder and partner of McGarrah Jessee. “From the beginning, our guiding principles for the agency have never wavered: we’ve aspired to create a culture that allows us to work with great people, who we genuinely like and admire, which in turn contributes to creating great work that we all feel proud of. Jeff resolutely embodies these qualities. His talent speaks for itself and his enthusiasm is contagious."

“We’re working with considerably tighter timelines,” explains Roach. “Having direct and immediate access to Jeff during the creative concepting stage, for everything from formal briefs to casual in-the-moment brainstorming with creative directors, is a tremendous boon for the agency and our clients.”

“Jeff will bring to bear his considerable talent along with his extensive experience and expertise to the full range of work we’re currently producing. Having that kind of firepower on everything from a documentary film to a national 30 second spot to an Instagram post is pretty amazing to think about,” says Mikus.

Throughout his career, Bednarz has directed brand campaigns for clients American Airlines, AT&T, BlueCross BlueShield, Budweiser, Michelob, and The Salvation Army. His ability to communicate and genuinely connect with people has been a driving force in his success, earning him collaborations with such noted agencies as BBDO; DDB; Goodby, Silverstein & Partners; Grey NY; McCann Worldwide; Publicis; The Richards Group; and TM Advertising.

Known for his cinematic, documentary style film, Bednarz turned his attention to football in small-town America in the short film 6, a SXSW official selection, and captured the spirit and inspirational portraits of the people of Pin Point, Georgia in the film Take Me To The Water which earned Best Documentary at the 2012 Charleston International Film Festival.

“Storytelling has always been my love and the rapid transformation of media means we have to change to meet clients’ needs. Working in tandem with the conceptual creatives at the origin feels right and it meant starting something new,” Bednarz explains. “Creating this partnership is not only an alignment of professional respect and principles it’s a creative force that will transform client experience and brand stories.”

Bednarz has a long history with McGarrah Jessee, directing campaigns for clients Whataburger, Shiner, Merrick, E4Youth and Frost Bank. “Jeff worked 120 shoot days last year. He’s worked with over 200 global brands,” says Bryan Jessee, co-founder and partner of McGarrah Jessee. “His dedication to his clients is first class. We’re proud to have him as a partner.”