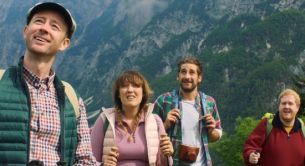 McDonald’s is backing the return of its Great Tastes of the World menu with an extensive new ad campaign created by Leo Burnett London.

In the new television spot, a group of Brits clad in summer walking gear are preparing to scale a verdant mountain in the Swiss Alps. Before they can, however, the weather closes in and they are left shivering in an ice cave.

The voiceover says ‘Sometimes a taste is all you need’ – the strapline associated with McDonald’s Great Tastes of the World. We then see a close-up shot of the McDonald’s rich and creamy Swiss stack looking delicious with its smoky bacon and emmental cheese sauce.

The ad follows a spot promoting the French-inspired burger in which Lycra-clad Brits attempting - and failing - to tackle the Pyrenees on their high-end racing bikes are cheerily passed by a local Frenchman effortlessly scaling the hill on his traditional push bike.

Two further television ads will follow promoting Brazil and Jamaica-inspired menu items, along with radio spots, social activity, press, digital and out-of-home advertising. In each, a similar theme is followed with holiday optimism quickly turning out to be misplaced.

Each country-themed burst runs for two weeks, making eight weeks in total for the campaign. The Switzerland ad breaks on October 10.

Michelle Graham-Clare, McDonald’s Head of Marketing, Food and Beverages, said: “With Great Tastes of the World comes the opportunity to give our customers a taste of adventure, and following on from last year, this suite of ads does exactly that! We’re encouraging our customers to try something a little bit different, with four tasty burgers all inspired by countries from around the world.

Pete Heyes, Creative Director at Leo Burnett London, said: “It’s great to continue this platform through into year two. And this year, it’s just that bit bigger and funnier. Scorching British summers aside, it may well be worth considering a staycation and a McDona