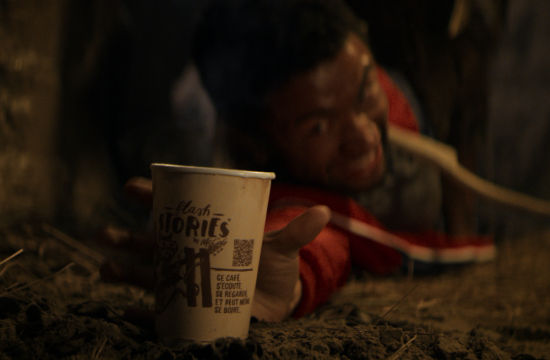 From the beginning of time, when we have a coffee, we also like to open our newspaper and read about the latest news. It is this 'coffee-news' ritual that McDonald’s is about to reinvent. Not in three test restaurants or in one region, but in over 1,500 restaurants. In other words, at all locations across France. A new way of savouring your coffee while enjoying digital content accessible via a QR code printed on all coffee and bakery products at McDonald’s.
The starting point: a new design has been introduced on all coffee cups and bakery bags sold at McDonald’s, which become the front pages of this reinvented coffee-news ritual. TBWA\PARIS called the illustrator Peter Strain who, for the occasion, used coffee instead of ink.
The result of this original collaboration is five compositions. Sports, fashion, culture (cinema/music), news and gaming are the five content sections to discover on the digital platform, which is called 'Flash Stories by McCafé'. This content, which combines original production and curation, is created each week by DAN\Paris in the form of mobile stories which can be consumed in the time it takes to enjoy your coffee or cookie. DAN\Paris and TBWA\Else have provided a dedicated studio that brings together a range of expertise (authors, film makers, motion designers, community managers) for this production. An exclusive way to enjoy all this content: by scanning the QR code printed on all McDonald’s coffee cups and bakery bags.
To kickstart this new ritual, TBWA\PARIS has envisioned a more event-driven way to play on the idea of combining the container (the coffee cup) and the content (Flash Stories). Starting from the cinema theme, TBWA\PARIS created 'Lost in the Black Forest', the true-to-life film trailer where four students lost in the woods and confront an evil wizard. But the new McCafé cup gradually goes deeper into the story, getting involved in the plans and in the performers’ acting and makes us juggle thriller and comedy.
A real trailer is a real way of discovering it. This trailer will be shown in movie theatres starting December 5th. Even more original, starting December 4th, fans of the big screen can see what makes 'Lost in the Black Forest' a true-false film on the AlloCiné website. “It’s all there: the trailer, film poster, synopsis, fact sheet and filming anecdotes. There's magic right down to the smallest details,” says Faustin Claverie.
Produced by TBWA\Else and directed by the Hungry Beards collective (Benjamin Marchal, Faustin Claverie, Josselin Pacreau, Sébastien Guinet), the trailer picks up the codes of the genre, and thus needed significant technical means. “Shots filmed by Black Unicorn, with a drone, quad, with watertight underwater cages, but also the top British casting and set design, we required a very high production value so that it’s believable from the first seconds of the film,” adds Benjamin Marchal.
The end of the film reveals how you can enjoy this new coffee ritual in McDonald’s restaurants. Just scan the QR code to access all 'Flash Stories by McCafé'.
view more - Creative