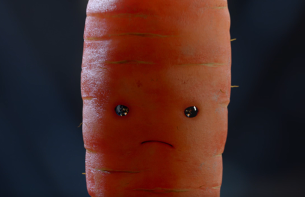 At 11.40am (7th November) on ITV, discount supermarket Aldi was finally unveiled as the brand behind the anonymous teasers which were planted across the country, featuring a lone carrot and the verse,  ‘Legends aren’t born they’re grown’.

The discounters Christmas advert titled, The Amazing Christmas Carrot, finally puts to rest the curiosity behind the carrot. The advert follows the plight of Kevin The Carrot, who at 3 inches tall, embarks on a dangerous quest through a lavish Christmas spread to meet Santa, all the while passing treacherous conditions before him: tumbling Specially Selected Goose Fat Roast Potatoes; an Everest of ice cubes chilling a bottle of Veuve Monsigny Champagne Brut and a flaming Specially Selected Exquisite Vintage Pudding.

The story ends well as viewers see Kevin The Carrot swing bravely onto the chimney breast and land, albeit exhausted, next to a perfectly placed Specially Selected Mince Pie. The ending will bring a smile to even the steeliest of hearts as we see Kevin The Carrot close his eyes and - with the magic of Christmas - we see him fly high in the sky on Santa’s sleigh over London, Glasgow and Bristol.

A limited-edition Kevin The Carrot soft toy, will be launching in stores from 24th November for £2.99, with 100% of the profits raised in Aldi’s UK stores going to their charity of the year, Barnardo’s.

Tony Baines, Joint Managing Director of Corporate Buying at Aldi, said: “We’ve had an incredibly successful year at Aldi and our Christmas advert aims to celebrate our award-winning products, commitments to fresh, British, quality produce and of course our show-stopping festive range.

“We hope viewers enjoy watching Kevin The Carrot’s story as his adventures unfold throughout the season.”

This year alone, Aldi has won in excess of 300 awards, including Supermarket of the Year at the Retail Industry Awards and Grocer of the Year and the Grocer Gold Awards – amongst many others.