The campaign for The Hunger Project Australia, allows foodies to bid for a romantic dinner at Australia’s most popular restaurants 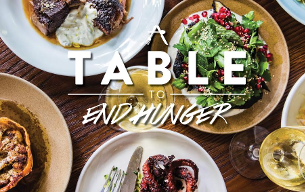 Following on from the successful 2016 launch campaign, McCann Sydney has kicked-off its second year of ‘A Table to End Hunger,’ expanding the campaign nationally as well as Singapore and Japan.

The campaign for The Hunger Project Australia, allows foodies to bid for a romantic dinner at Australia’s most popular restaurants on the hardest day of the year to get a table, Valentine’s Day. Bids are made via a dedicated eBay site with all proceeds going directly to The Hunger Project.

Tripling in size in just one year, the campaign has over 65 restaurants generously offering dinner and wine including Brasserie Gavroche in Singapore and The Apollo in Tokyo as well local Australian favourites Quay, Bennelong, Automata, Tipo00 and Minamishima.

McCann Sydney’s Managing Director Adam Lee said: “We’re immensely proud to have developed an idea that can work not only here in Australia, but is now getting traction around the world to support The Hunger Project’s goal of ending world hunger by 2030. Bid for a table, help others put food on theirs, it’s really that simple.”

The auction is live on a dedicated eBay site until Thursday February 2 with the campaign also including a partnership with Dimmi along with media support across digital, OOH and radio activity.

Melanie Noden, CEO, The Hunger Project Australia said, “We’re delighted to be partnering with McCann Sydney again on A Table to End Hunger, and so excited that so many top Australian restaurants have signed on to be part of this initiative that will have global impact.

Huge global progress has been made already: in the past 25 years the number of people living in hunger has actually been cut in half. That said, there’s still a long way to go to end world hunger by 2030, and ‘A Table To End Hunger’ is one way for Australians to play a part in the solution.”

Tom Walton of The Bucket List and Deus Bar & Kitchen fame has also added his support to the 2017 campaign.

"Food brings people together, it's what I love about being a chef, so I think it’s wonderful that The Hunger Project is taking that moment and giving back to the world through ‘A Table To End Hunger. It can be easy to forget not everyone is as fortunate as we are here in Australia,” says Walton.

McCann worked on the strategy, creative and implementation while DEC PR delivered the PR element of the campaign.

And you can check out the auction site here.